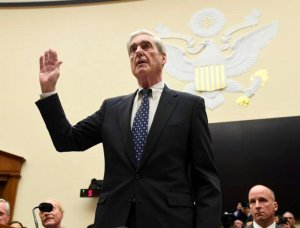 Mueller is sworn in for his testimony before Congress yesterday (yahoo)

In dramatic Congressional hearings yesterday, former Special Counsel Robert Mueller testified for a combined seven hours before two House Committees and an anxious public regarding what has come to be known as the Russia-Trump investigation.

Mueller, 74, a decorated Marine veteran and former Director of the FBI from 2001 to 2013 under Presidents George W. Bush and Barack Obama, was appointed Special Counsel in May of 2017.

He submitted the conclusions of his 22-month investigation to Attorney General William Barr on March 22, 2019. Barr's summary misrepresentation of the findings two days later came under intense criticism.

On April 18, 2019, Barr released a redacted version of the special counsel's 448-page report to the public.

To-date, the Mueller investigation has resulted in 37 indictments or convictions. Eight have pleaded guilty or been convicted of felonies, including President Trump's campaign chair, deputy campaign manager, national security advisor and lawyer. There are 14+ other criminal cases ongoing as a result of the investigation.

In June, Mueller was subpoenaed to appear before Congress to answer further questions about the report. 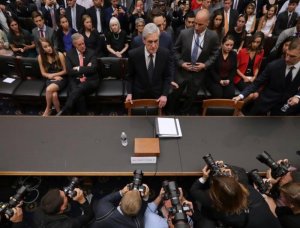 ACT ONE: HOUSE JUDICIARY COMMITTEE
The first hearing, which began at 8:30am before the House Judiciary Committee, focused primarily on components of Volume Two of the Mueller report, Evidence of Obstruction.

In his opening statement, Chairman Jerrold Nadler (D-NY) wasted no time in getting to the list laid out as fact in the report.

Nadler: "Among the most shocking of these (corruption) incidents, President Trump ordered his White House Counsel to have you fired and then to lie and deny that it ever happened, he ordered his former campaign manager to convince the recused Attorney General to step in and limit your work, and he attempted to prevent witnesses from cooperating with your investigation." 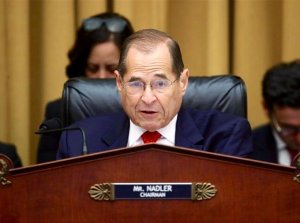 In pointed questions, Nadler asked Mueller:
Nadler: "The President has repeatedly claimed that your report found that there was no obstruction, that it completely and totally exonerated him. That is not what your report said, is it?"
Mueller: "Right, that is not what the report said."
Nadler: "The report did not conclude that he did not commit obstruction of justice. Is that correct?"  Mueller: "That is correct."
Nadler: "What about total exoneration? Did you actually, totally, exonerate the president?  Mueller: "No."
Nadler: "In fact, your report expressly states that it does not exonerate the president."  Mueller: "It does."

While Democrats hammered on confirming the obstruction charges, Republicans steered clear of disputing the individual actions by the President and his advisors. 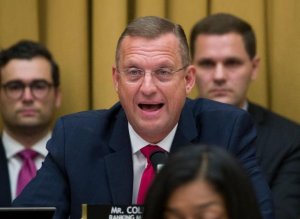 Despite attacks by Republican lawmakers on other issues from the origins of the investigation and its legality, to the Steele Dossier, conspiracy and alleged Russia-Clinton ties, Mueller remained committed to the facts and the four corners of his report.

His concise but often hesitant responses, however, sometimes appeared shaky, particularly when deferring to the language in the report - over 200 times in total. His most forceful response came when defending the integrity of his staff.

The most frequent drilling was on Mueller's decision to refrain from "a traditional prosecutorial judgement" on obstruction charges due to the DOJ's Office of Legal Counsel's (OLC) opinion.

The Mueller Report notes that, "while the OLC opinion concludes that a sitting President may not be prosecuted, it recognizes that a criminal investigation during the President's term is permissible...and that a President does not have immunity after he leaves office. Given those considerations...we conducted a thorough factual investigation in order to preserve the evidence..."

GOP Congressman Ken Buck (CO) was unintentionally helpful: "Was there sufficient evidence to convict President Trump or anyone else with obstruction of justice?"
Mueller: "We could not make that calculation...because the OLC opinion... so one of the tools that a prosecutor would use is not there."
Buck: "Could you charge the president with a crime after he left office?"  Mueller: "Yes."

In the end, committee Democrats got what they wanted among Mueller's responses, or so they thought: 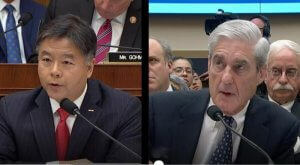 Congressman Ted Lieu (D-CA): "I'd like to ask you, the reason, again, that you did not indict Donald Trump is because of the OLC opinion stating that you cannot indict a sitting president, correct?" Mueller: "That is correct."

Mueller later clarified, "We did not reach a determination as to whether the President committed a crime."

The second hearing, at 12:00pm before the House Permanent Select Committee on Intelligence, focused primarily on components of Volume One of the Mueller report, Russian Interference in the 2016 Presidential Election, and possible conspiracy by Donald Trump and his associates.

Committee Chairman Adam Schiff (D-CA): Your report "tells the story of a foreign adversary's 'sweeping and systematic' intervention in a close US presidential election...but your report tells another story as well. The story of the 2016 election is also a story about disloyalty to country, about greed, and about lies."

A more forceful Mueller was forthcoming on the threat of foreign influence and election security: "Over the course of my career, I've seen a number of challenges to our democracy. The Russian government's effort to interfere in our election is among the most serious." 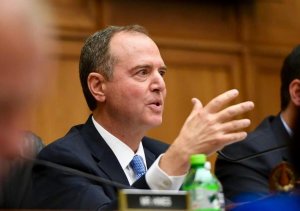 Schiff to Mueller: "Your investigation was not a 'Witchhunt" (pic: This Week)

As with Nadler, Schiff's pointed questions provided the affirmation Democrats were seeking on Russian interference, the Trump campaign's welcoming of Russian outreach, and planning of the campaign media strategy "based on Russian assistance" and the Russian-hacked emails through WikiLeaks.

At one point, Congressman Mike Quigley (D-IL) read a series of quotes by Trump from the report:"'This WikiLeaks stuff is unbelievable ... like a treasure trove.'"
Quigley: Would any of those quotes disturb you, Mr. Director?"
Mueller: "Problematic would be an understatement in terms of what it displays, in terms of giving some hope or some boost to what is and should be illegal activity."

Mueller also confirmed that Trump campaign officials had lied to the Grand Jury and to Congress to cover up their actions. 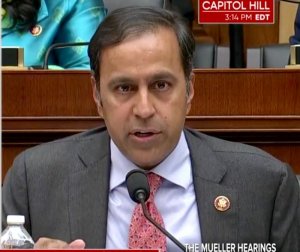 Congressman Raja Krishnamoorthi (D-IL) was particularly effective in getting Mueller to reveal a hint of pending criminal activity unknown to the public.

Krishnamoorthi, on former National Security Advisor Michael Flynn, who was charged with lying to the FBI: "Individuals can be subject to blackmail if they lie about their interactions with foreign countries ... Since it was outside the purview of your investigation, your report did not address how Flynn's false statements could pose a national security risk because the Russians knew the falsity of those statements. Right?"
Mueller: "I could not get into that because there are many aspects of the FBI that are looking at different aspects of that issue."  Krishnamoorthi: "Currently?"  Mueller: "Currently."

Congressman Peter Welch (D-VT) asked if the decision not to bring charges of conspiracy against members of the Trump campaign "does not mean your investigation failed to turn up evidence of conspiracy."
Mueller: "That is correct." Welch then cited the list from the report.

Welch: "Have we established a new normal?...that if any one of us running...any candidate for the presidency of the United States, aware that if a hostile foreign power is trying to influence an election, has no duty to report that to the FBI?"  Mueller: "I hope this is not the new normal. But I fear it is." 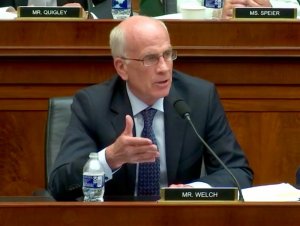 Peter Welch (D-IL): Is this the new norm?

When asked about Russia's continued interference, Mueller was stark in his message, "It wasn't a single attempt. They're doing it as we sit here."

Schiff: "From your testimony today, I gather that you believe that knowingly accepting foreign assistance during a presidential campaign is an unethical thing to do."
Mueller: "And a crime...given certain circumstances."
Schiff: "And to the degree that it undermines our democracy and our institutions, we can agree that it is also unpatriotic.
Mueller: "True."  Schiff: "And wrong."  Mueller: "True."

This morning's hearing also addressed the issue of Mueller's intent for the report's future.

Nadler: "Director Mueller, we have a responsibility to address the evidence you have uncovered. You recognized as much when you said 'the Constitution requires a process other than the criminal justice system to formally accuse a sitting president of wrongdoing."

Nadler: "We will follow your example, Director Mueller. We will act with integrity. We will follow the facts where they lead. We will consider all appropriate remedies...We will do this work because there must be accountability for the conduct described in your report, especially as it relates to the President."

July 26, 2018 This is a crucial time in both the election cycle and the baseball season. It seems appropriate timing, then, to offer our readers the exceptional opportunity to win amazing baseball...