Ballot initiatives have become an integral part of our electoral process - as a form of direct democracy and as an avenue for checking legislative powers.

Legislative Referral : Allows a state legislature to put a statute or constitutional amendment up for popular vote. 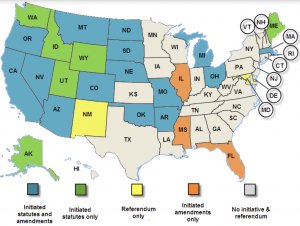 The first formal initiative originated in Oregon in 1902 as an attempt to expand individual voting rights and the ability to hold legislators accountable. The "Oregon System" spread to other states, and became one of the signature reforms of the Progressive Era, used to recall elected officials and stage referendums on controversial new legislation.

Ballot Power
Today, twenty-six states and DC grant their citizens amendment, statute and/or veto referendum power through the initiative process. All US states, with the exception of Delaware, allow legislatively-referred statute or constitutional amendments (LRCAs).

In a year when control of the White House, the US Senate and key legislatures throughout the country are at stake, major support or opposition to a ballot measure can be a critical factor in helping drive higher voter turnout to the polls. 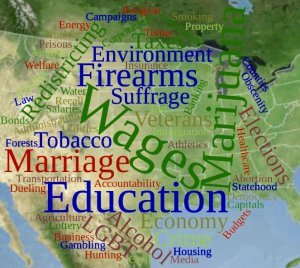 2020 Initiatives
As of June 23, 2020, 96 statewide ballot measures in 32 states had been certified for the 2020 ballot, covering issues from marijuana, election law, taxes, healthcare and energy, to victims' rights, minimum wage and abortion.

Although a handful have, or will be, held prior to this year's general election, 87 measures will be on the ballot November 3rd.

In the age of elections during the coronavirus pandemic, however, citizen-led ballot campaigns that typically rely on collecting thousands of constituent signatures at large local events or by door-to-door canvassing, are up against unprecedented challenges.

While some states and cities are rewriting policies to accommodate the crisis and allow flexibility in the initiative process, others have been more resistant, resulting in suspension of signature-gathering or delay of a measure indefinitely.

While it is too early to know which of the following measures won't survive, check the initiatives in your state and see where you can make a difference at the ballot box! 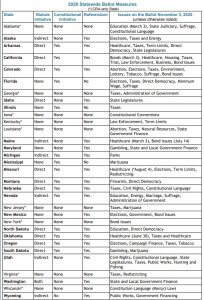