Ballot initiatives have become an integral part of our electoral process - as an effective tool for advancing direct democracy and as an avenue for checking legislative powers.

Constitutional Amendments may be referred to a statewide ballot through these methods or through a
constitutional convention, where allowable by state. 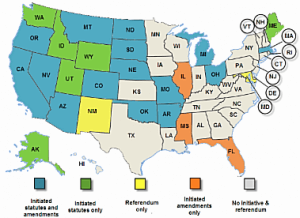 The first official system of initiatives and referendums, however, originated in Oregon in 1902 as an attempt to expand individual voting rights and the ability to hold legislators accountable. The "Oregon System" spread to other states, and became one of the signature reforms of the Progressive Era, utilized to recall elected officials and stage referendums on controversial new legislation.

Major wedge or publicly controversial initiatives are usually held in on-election (even) years when congressional and more electoral seats are up, and when ballot measures can be used to help drive higher voter turnout to the polls.

In 2018 there were 167 statewide initiatives on the ballot in 38 states, covering issues from marijuana, redistricting, taxes, healthcare and energy, to victims' rights, minimum wage and abortion.

Twenty-six states and DC allow citizen-initiated statutes or amendments, or veto or legislative referenda. That includes Arizona and Florida, which have commissions with the authority to place statewide measures on the ballot.

On average, there are 170 statewide measures on the ballot in even years and hundreds more at the local level.

2019 Initiatives
Four of the 26 states, Colorado, Maine, Ohio, and Washington allow for ballot initiatives or veto referendums in any odd-numbered years, as does Mississippi when the governor's seat is up. Several more often refer statewide measures to the ballot via the legislature.

Over the last decade, the average total number for odd years is 33 initiatives on the ballot in an average of eight states. In 2019, 21 statewide ballot measures have so far been certified for the ballot in seven states.

The Cost
Ballot initiatives have also become a part of the political industry, with full-fledged media and ground campaigns which average around $1.1 million in cost.

According to Ballotpedia, a total of $1.185 billion was raised for or against 2018 measures, with $1.16 billion in expenditures. The 68 citizen-initiated measures accounted for 83% of the campaign finance activity.

DemDaily: What Happens if Trump Drops Out?

While we hate to give ink to Donald Trump, the unprecedented flood of reports over the last 48 hours regarding the GOP meltdown over its nominee’s increasingly rogue behavior begs for...