While national polling of presidential rivals Joe Biden and Donald Trump have continued throughout the coronavirus crisis, surveys on the status of the presidential race in the states have been infrequent of late.

With the exit of Biden primary opponent Bernie Sanders from the race ten days ago, and with most of the country on lockdown, monitoring the mood of the electorate in battleground states appears to have resumed, with several polls out this week.

While the former Vice President continues to lead the President nationally by six to seven points, the state polls offer a glimpse as to where at least some of the battles will be fought in the field.

Opinion polling is a critical mainstay of politics and the most effective tool, done correctly, for explaining the factors that influence an election, and the progress of candidates in a race.

Not All Polls are Created Equal
Although polling is based on mathematical calculation, it is both art and science. The sampling and the data analysis is science. The interpretation and survey questions are art.

A poll tracks voter responses and provides a snapshot, usually over a number of consecutive dates, of a candidate's progress at any given time during a race.

The survey language, number and order of the questions is cricial to avoid influencing the results of the poll. A sample size of at least 500 for a state and 1,000 national poll is necessary for a credible result. 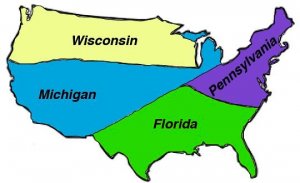 To accurately gauge the opinion of a nation, state or district, a political "pollster," or consultant, must use a perfectly random sample and then adjust, or weight, the sample so that it closely matches the characteristics of that population. If 50% of voters are female, then 50% of the sample group needs to be female. The same applies to characteristics like age, race and geographic location.

The most popular method is through random digit dialing (RDD) which utilizes an updated database of active landline and cell numbers. The sample may be among registered voters (RV), likely voters (LV) or adults (A) over 18. Polls may be conducted through live calls or interactive voter response (IVR).

The validity of online polling is still of great debate within the political industry as it excludes a proportionate representation of some demographic groups, like seniors and low-income voters who may not have personal email addresses.

A poll must also reflect the "margin of error," which measures the effects of chance and uncertainty between the sample and population, and is defined as the radius of a 95% confidence interval for a particular statistic. As an example, in the YouGov poll below, the 3.4% MOE means that Biden's lead could be as much as 51.4% or as little as 44.6%.

While those polls conducted prior to April 13th are now obsolete, the averages before and after reflect Joe Biden's consistent lead over Trump over the last three weeks.

September  18, 2018 The confirmation battle for President Trump’s Supreme Court nominee Brett Kavanaugh has reached fever pitch in the wake of allegatons against the Judge that he sexually...