It has been three days since the country's historic rejection of the red wave, with control of the US House and Senate, as well as other key races still hanging in the balance.

As always, DemList has endeavored to keep you informed on the issues, politics and players, but we need your immediate assistance to continue producing the daily column as a free resource to all.

Georgia: Incumbent Democrat Raphael Warnock (49.6%) and GOP challenger Herschel Walker (48.3%) are going to a December 6th runoff as no candidate achieved 50% of the vote in the election. 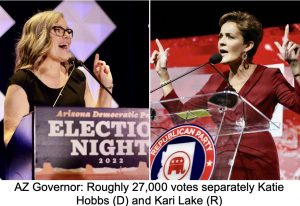 Secretaries of States: Nationally, 20 Democrats to 27 Republicans (pre-election)
Of the country’s 47 Secretary of State offices, 27 were up for election and eight offices’ appointment authorities were on the ballot.
Flipped: Democrats flipped the Maryland gubernatorial, giving them appointment control in January.
Outstanding: Arizona, Nevada, New Hampshire, and Wisconsin

January 20, 2020 The eighth day of the impeachment trial of President Donald J. Trump launched the Question and Answer phase from Senators, using the opportunity to expand upon and highlight key...