Former First Lady Michelle Obama is wading into the mid-terms wars with a new organization, When We All Vote. 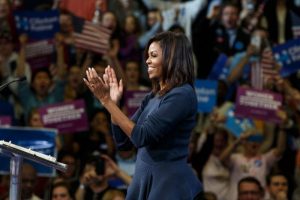 The non-profit, nonpartisan effort will focus on voter registration via public service announcements, events, rallies and trainings leading into Get-Out-The-Vote (GOTV) days of action closer to the election.

One of history's most popular presidential spouses, the former executive, attorney, public servant and mother has enlisted a host of celebrities to help her get the vote out for this November's critical elections.

Voter participation in mid-term elections is traditionally low.  In 2014 just a third of eligbile Americans voted and over 21% of eligible citizens were not registered.

Particular emphasis will be placed on the youth vote, with organizational partner RockTheVote concentrating on registering the "four million americans who turn 18 this year."

When We All Vote is incorporated separatelyfrom the Obama Foundation, Barack and Michelle Obama's personal offices, and the former President's political arm, Citizen 44.  Obama alum Valerie Jarrett will head up the board, joined by former Obama senior advisor Pete Rouse, Kyle Lierman as CEO and Tina Tchen as Treasurer. 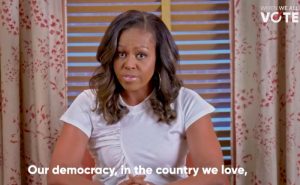 The Obamas have maintained a low profile since the 2016 election, with the 44th President concentrating most of his efforts through the National Democratic Redistricting Committee (NDRC) and Michelle's appearances limited to a few focused on women's empowerment and paid speeches.

The decision to utilize her for a non-partisan effort is of frustration to some party players who had hoped to see Michelle as a surrogate and advocate for Democratic candidates.

While Barack Obama is expected to start hitting the candidate campaign trail through November 6th, the former first lady's preference is to focus on the higher ground of voter engagement, and the release of her memoir, Becoming, due out after the election.

As a 501c3 organization, contributions to When We All Vote are tax-deductible, which also makes it considerably easier to raise the goal of $8 million for the voter registration campaign.