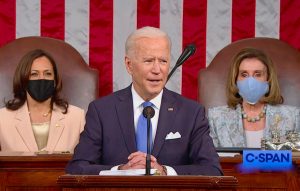 A Washington Post-ABC poll released this week does not bode well for Democrats, serving as a harsh reality check at a critical point in the election year and in Joe Biden's presidency.

As Biden prepares to address the nation in his first State of The Union address tonight at 9:00pm EST, Texas voters will have just finished casting their ballots in the country's first state primary election of the year.

The days following both events will be important in gauging the direction of the administration and of the voters going into the midterm elections, just eight months from now.

Now over 13 months into his tenure, Biden is balancing crises at home and abroad that overshadow an otherwise historic first year of accomplishments.

It's Still The Economy
The WashPo/ABC poll, however, reflects little recognition of those achievements, painting an American electorate narrowly focused on the economy, record inflation and impatience with what is, at least for now, a stalled domestic agenda. 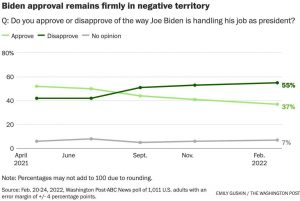 On the economy overall, Biden garners only 37% approval v. 58% disapproval, and only 36% rated him a strong leader, while 59% disagreed with the statement.

On Russia and Ukraine, 67% of respondents said they would support economic sanctions on Russia, and of those, 76% still supported sanctions if they resulted in higher energy prices in the US. Regardless, only one out of three Americans gave Biden positive marks on his handling of the international crisis.

"Historically, in midterm elections," says Democratic Pollster and strategist Brad Bannon,"to win the House, we need to be ahead in the generic trial heat by approximately 7%. Although Democrats have come out of redistricting with a more favorable map than anticipated, they are still are down 7% now, so we have a long way to go."

Turning Point?
The poll numbers, however, also preceded one of the most consequential weeks in Biden's presidency with the launch of war between Ukraine and Russia and the unprecedented solidarity of the European Union and NATO countries, led by the United States, in imposing sanctions against Russia.

History also teaches us that wartime presidents get a big boost in the polls, notes Bannon, provided the country also gets the economic boost that usually accompanies it.

In March 1991, after victory in the Persian Gulf war, President George H.W. Bush scored an 89% approval rating, the highest presidential job approval rating ever recorded to that date, eclipsed only by his son George W. Bush's 90% approval rating after the 9/11 terrorist attacks.

Bush's approval rating remained above 80% until mid-April 1991 but gradually declined over the course of the year as Americans' attention shifted to the struggling US economy. Bush lost reelection in 1992, receiving 37.4% of the vote to Bill Clinton 43%, and Ross Perot's 18.9%

May 19, 2022 Five states saw primary elections Tuesday, including the still undecided GOP primary in Pennsylvania that continues to hold the country’s attention. Other crucial contests also...