House Speaker Nancy Pelosi, in this morning's press conference, unveiled the latest list of legislation that has passed the US House, but is being "buried" in US Senate.

If then both chambers pass the bill, then it goes to the President for his signature for signing into law. The President may then veto the bill, but a 2/3 vote of Congress can override that veto. 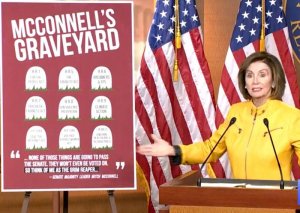 Pelosi: "The Senate will certainly hear from the public...(these) issues that have bipartisan support across America"

Since Democrats have taken control, they have passed over 100 pieces of legislation, most of them bipartisan, that have gone to the Senate for consideration.

All have been held up in committee or from being scheduled for a floor vote by Republican Leader Mitch McConnell and the GOP-controlled Senate.

In April McConnell openly annointed himself "the Grim Reaper," adding "None of this legislation will pass."

The list reflects not only the agenda of the Democratic Party, but of the American people, as born out by polling. Pelosi highlighted just a few.

HR 1: For the People Act: A bill to expand Americans' access to the ballot box, reduce the influence of big money in politics, and strengthen ethics rules for public servants, and for other purposes.

HR 5: The Equality Act: To prohibit discrimination on the basis of sex, gender identity, and sexual orientation in employment, public education, housing, public accommodations, and other areas of life. 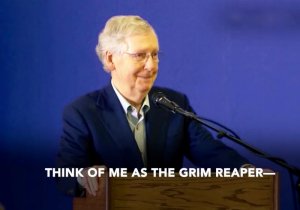 In April, McConnell crowned himself "The Grim Reaper" (Watch/Click)

HR 6: American Dreamer and Promise Act: To allow the roughly 2.5 million undocumented immigrants who came to the U.S. as minors, including members of the Deferred Action for Childhood Arrivals (DACA) program, a path toward permanent resident status.

It also allows immigrants who have been in the country under Temporary Protected Status (TPS) or Deferred Enforced Departure (DED) to gain permanent residency.

HR 7: Paycheck Fairness Act: To amend the Fair Labor Standards Act of 1938 to provide more effective remedies to victims of discrimination in the payment of wages on the basis of sex, and for other purposes. 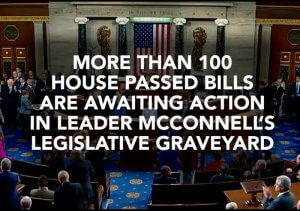 HR 9: Climate Action Now: Requires the President to develop and update annually a plan for the United States to meet its nationally determined contribution under the Paris Agreement on climate change.

It describes steps to (1) cut greenhouse gas emissions by 26%-28% below 2005 levels by 2025, and (2) confirm that other parties to the agreement with major economies are fulfilling their announced contributions. In addition, the bill prohibits federal funds from being used to withdraw from the agreement.

HR 1644: Save the Internet Act: To restore Open Internet Order adopted by the Federal Communications Commission on February 26, 2015 and return to the regulatory framework and oversight of Internet service providers (ISPs) to the FCC.

There are 33 regular Senate races up in 2020. Find out where your US Senator stands.

February 26, 2019 As a daily political column and site, DemList is dedicated to informing and connecting our readers, allies and the larger democratic family to the resources needed to be...