At 12:37am Saturday morning, on the fifteenth ballot, Republican Congressman Kevin McCarthy (CA) was elected Speaker of the US House of Representatives. 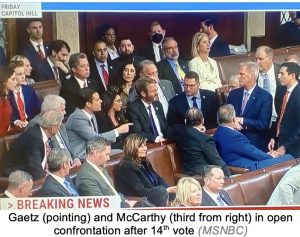 The path that led to that outcome will go down in history as one of the most dramatic and suspenseful floor elections of the last century.

Over four grueling days which laid bare the bitter ideological and often deeply personal divisions within the new GOP majority, a small group of hardline conservatives held the Congress and the viewing American public captive.

The standoff concluded when Congressman Matt Gaetz (FL), who led the original 20, then final six, insurgent Republicans, acquiesced, following a final heated exchange with McCarthy on the floor which included the threat of physical blows by another member.

It was not, however, before Gaetz secured a list of unprecedented concessions on behalf of his fellow conservative House Freedom Caucus members that promise to all but cripple McCarthy's ability to govern in an already narrowly divided 118th Congress. 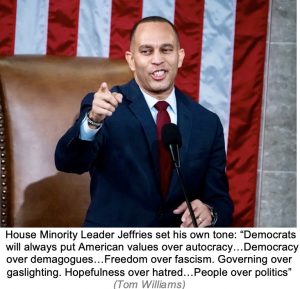 McCarthy's moment at the daïs came after a lengthy introduction by Democratic Leader Hakeem Jeffries, who had quietly observed the chaotic GOP proceedings -- offering a contrasting symbol of a unified Democratic caucus sitting across the aisle.

An empowered Jeffries took the opportunity, in a hip-hop-style sequence, to list the ABCs of what Democrats will fight for over the next two years -- before handing the gavel to McCarthy.

McCarthy began his acceptance speech on a conciliatory note, saying, "What we do here today, next week, next month, and next year will set the tone for what follows." That tone, however, included "checks and balances.. on the President’s policies," promising to "get America back on track" by securing the country's southern border, ending "wasteful Washington spending" and stopping "the rising national debt."

He also pledged to "hold the swamp accountable, from the withdrawal of Afghanistan to the origins of COVID, to the weaponization of the FBI. Let me be very clear, we will use the power of the purse, and the power of the subpoena to get the job done." 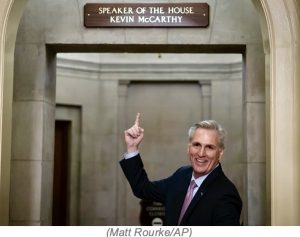 The 27-minute speech may be the only time McCarthy wields such undisputed power as he faces, at the outset, one of the most compromised speakerships in modern history.

Between the narrow nine-seat majority held by Republicans, and the extreme deals made with the right-wing 9% of his conference that opposed him, McCarthy's decade-long pursuit of the prize culminated in a severely diminished gavel.

The most ominous concession: A change in the rules for "a motion to vacate" or remove the chair, enabling a single lawmaker to launch the process of ousting the Speaker.

The DemList Calendar is now open to all to submit events for promotion in every state. Just a few rules