Democrats and Republicans in Maryland elected their nominees for congressional, state executive and legislative seats yesterday, along with hundreds of down-ballot races. 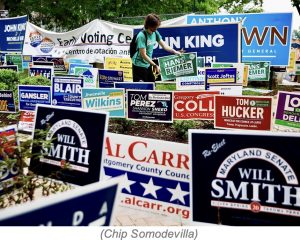 In the heavily blue Free State, which Joe Biden won by 33 points over Donald Trump in 2020, the winner of the Democratic primary is often the presumed general election winner. Democrats hold both US Senate seats, seven of the eight Congressional seats, and supermajorities in both chambers of the Maryland legislature.

Prior to the election of outgoing Republican Governor Larry Hogan in 2014, Democrats had yielded the governorship only once in almost six decades. That was from 2002 to 2006 with the election of Republican Bob Ehrlich, who was subsequently unseated by Democrat Martin O’Malley.

Despite their overwhelming advantage in voter registration, Maryland Democrats have shown a willingness to vote for a more moderate Republican like Hogan, who is perceived to work across the aisle and, in his case, someone who regularly took issue with Trump's policies and statements.

US SENATE: First-term US Senator Chris Van Hollen (D) handily dispatched with challenger Michelle Smith, 78% to 22%. He is expected to easily defend his seat against businessman Chris Chaffee, winner of the ten-candidate GOP primary with 22%. 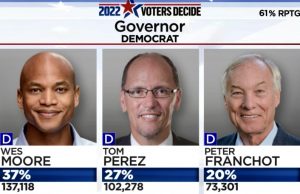 GOVERNOR: In the contest to succeed term-limited Republican Governor Larry Hogan, former veteran, nonprofit CEO, and best-selling author Wes Moore appears to have prevailed in the competitive Democratic primary, although the race has yet to be called.

With 62% reporting, Moore had secured 36.7% of the vote to former US Secretary of Labor and former DNC Chair Tom Perez's 27.4%. State Comptroller Peter Franchot was at 19.5%, followed by five other contenders below 5%.

Cox, who chartered three buses to attend the January 6 Stop the Steal rally in Washington, DC, posted during the Capitol attack that Vice President Mike Pence was “a traitor.” 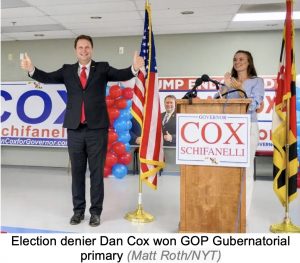 Cox's primary campaign was boosted, however, by over $1.16 million in television advertising from the Democratic Governors Association (DGA). The risky strategy, employed in other states, was an effort to help Cox secure the nomination as the easier candidate to defeat in the general election.

Hogan, who has referred to Cox as a “QAnon conspiracy theorist," confirmed to The Hill Wednesday that he will not be supporting Cox in the general election this November.

Hogan's inability to deliver the election of Shultz, his hand-picked successor, may reflect poorly on his political clout as he reportedly considers a 2024 presidential run.

Harris was one of 11 GOP members of Congress who met with former President Donald Trump in the days leading up to the January 6th attack to discuss strategies for overturning the 2020 election results. 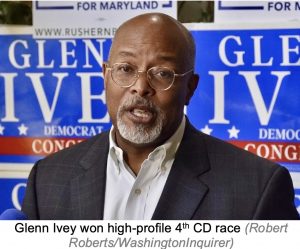 The majority Black, Prince George's County-based district drew national attention for the nearly $8 million spent by outside groups focused on Israel. A bulk of that came from the United Democracy Project, a super PAC partly funded by the bipartisan American Israel Public Affairs Committee, which invested heavily to defeat Edwards, whom AIPAC views as anti-Israel.

Ivey will face Republican Jeff Warner in the general election.

Redistricting shifted the safely Democratic Sixth Congressional District into an R+1 (one point more Republican than the country as a whole) seat, putting it into play. Two-term Democratic Congressman David Trone first won the current seat in 2018 with 59% of the vote, and was reelected with the same percentage in 2020.

State Delegate Neil Parrott, who unsuccessfully ran against Trone in 2020, swept the GOP primary with 64% in what is now a Democratic-leaning contest. 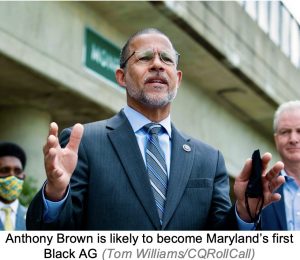 Brown, who would become Maryland’s first Black attorney general if elected, is heavily favored to win in November against GOP nominee Michael Peroutka, an attorney and former Anne Arundel County Council member, who won his primary with 58% to Jim Shalleck's 42%.

The winner will succeed Peter Franchot, who ran for the Democratic nomination for governor this year and who has been Comptroller since 2006.

November 2, 2017 President Trump has announced his nominee for new Chair of the Federal Reserve, the central banking system of the United States. Trump’s nominee, Jerome Powell, will replace...

January 10, 2018 Last week the Trump administration announced plans to allow new oil and gas drilling in nearly all of our nation’s coastal waters. The White House cited the move as one...