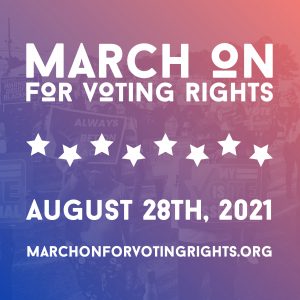 This Saturday everyday citizens and activists will descend on Washington, DC and other major cities to demonstrate against the wave of voter suppression laws sweeping the country.

The March On For Voting Rights comes 58 years after the historic August 28, 1963 March on Washington, led by Dr. Martin Luther King, which denounced the tyranny of "Jim Crow" laws that legalized racial discrimination.

The last year, however, has signaled a return to that era, with over 400 voting suppression measures introduced in 49 states, and 18 restrictive voting laws successfully passed in 30 states.

The Mission: The March On for Voting Rights is a nonviolent, nonpartisan mass mobilization intended to shine a light on what is happening in state legislatures nationwide and demand that elected officials protect democracy through the passage of comprehensive federal legislation.

That includes passage of the For The People Act and the John Lewis Voting Rights Advancement Act.

Organizers: March On For Voting Rights is joined by close to 200 partner organizations, unions and networks, including DemList! 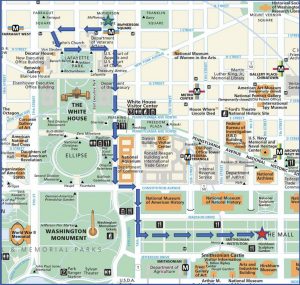 Sister Marches
Atlanta, Miami, Houston, Phoenix and in 75 locations across the country
Find a March in your City or Town
Join The Movement: Host An Event

Actions
Contact Your Member of Congress and demand they take action on For The People Act, the John Lewis Voting Rights Advancement Act, and the Washington, DC Admission Act. 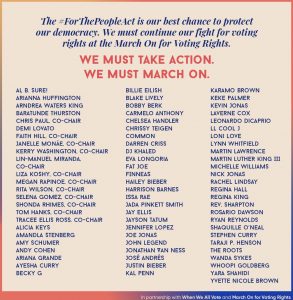 It's time to march again. As a proud partner of March On For Voting Rights, DemList invites you to join us!

October 13, 2021 Yesterday the US House officially signed off on a $480 billion increase in the federal debt capacity, a week after the US Senate agreed to the temporary increase to avoid...