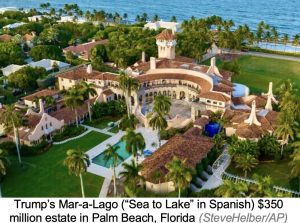 In the first-ever search of a former US president’s home, FBI officials seized 27 boxes from Mar-a-Lago last Monday, including classified documents and sensitive national security materials.

One of the sets of documents was listed as “classified TS/SCI,” shorthand for “top secret/sensitive compartmented information,” and an unnamed source cited by The Washington Post reported that possible nuclear documents were among those sought by authorities.

The warrant and general inventory list of items retrieved from the Florida estate and club, owned by former President Donald Trump, were unsealed by a federal magistrate judge last Friday. 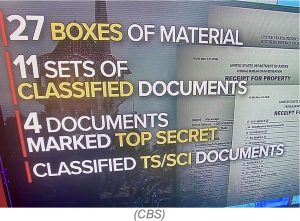 The warrant was made public after Attorney General Merrick Garland announced on Thursday that the Department of Justice (DOJ) wanted it unsealed, "in light of the former president's public confirmation of the search, the surrounding circumstances, and the substantial public interest in this matter."

Garland, who personally signed off on the warrant, said that officials had scrupulously followed federal investigations guidelines and were forced to make the move after repeated attempts at less invasive measures failed.

Timeline
Under the Presidential Records Act, all records from a president's time in office must be turned over to the National Archives and Records Administration (NARA) at the end of their term.

After Trump left office in January 2021, NARA reported that it had received some of Trump's presidential records, but others "had been torn up by" the former president. Some were reconstructed by White House records management officials, while others were turned over as shredded documents. 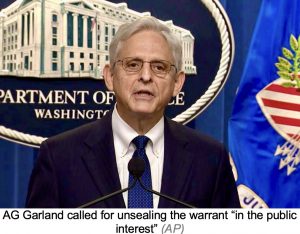 After a year of negotiations with Trump's team, NARA confirmed that in mid-January 2022 they had received "15 boxes that contained Presidential records" from Trump's Mar-a-Lago residence. The transfer came only after a Trump representative disclosed the existence of the records to the agency.

In a February 18 letter to Congresswoman Carolyn Maloney (D-NY), Chair of the House Committee on Oversight and Reform, NARA confirmed that classified national security information was among the documents received and that the matter had been referred to DOJ.

On February 24, Maloney sent a letter to the NARA requesting a "detailed description of the contents of the boxes recovered from Mar-a-Lago," as part of its investigation into the White House records.

In response to the National Archives’ referral to the DOJ in February, federal authorities launched their own investigation and, on April 7, instructed NARA to seise sharing further details about the documents with the House Oversight Committee.

In early May, DOJ issued a subpoena to NARA for the documents recovered from Mar-a-Lago. DOJ also requested interviews with at least half a dozen White House officials regarding the former president's mishandling of the classified documents, described as slapdash and ad hoc. According to multiple reports, Trump was known for ripping up records that aides would have to retrieve from trash cans or the floor and tape back together. 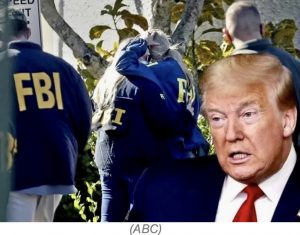 “It worried people all the time...Trump had a habit of grabbing intelligence documents. God knows what he did with it,” said former Trump National Security Advisor John Bolton in an interview.

During this period, Trump received a grand jury subpoena for further documents believed to still be in his possession. Trump, however, reportedly repeatedly rejected advice by advisers to to turn them over.

On June 3, DOJ and FBI investigators, including Jay Bratt, the DOJ’s top counterintelligence official, met with Trump and his lawyers Evan Corcoran and Christina Bobb, at Mar-a-Lago, seeking more information.

The officials examined a basement storage area where Trump housed the White House materials, and left with classified documents. They also obtained a written declaration from a Trump lawyer attesting that all the material marked classified in the boxes had been turned over.

Bratt subsequently instructed Corcoran to further secure the remaining documents and, on June 22, subpoenaed surveillance footage over a 60-day period from Mar-a-Lago, including views from outside the storage room that revealed incidences where boxes were moved in and out of the room. 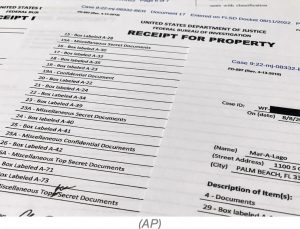 On August 5, US Magistrate Judge Bruce Reinhart in South Florida approved an application for a search warrant, and last Monday, August 8, the FBI executed the search warrant, leaving with 27 boxes of information.

Last Thursday, Trump tweeted out that his attorneys had been “cooperating fully” and “the government could have had whatever they wanted, if we had it.” He also claimed that he declassified all documents seized by agents before he left office, despite no record of his following any official process. Trump has subsequently claimed that some of the material was protected by executive privilege, and that FBI agents planted the confidential evidence.

In response to the "grave" security breach revealed in the Mar-a-Lago documents, Maloney and House Permanent Select Committee on Intelligence Chairman Adam Schiff (D-CA) have called on Director of National Intelligence Avril Haines to conduct an “immediate review and damage assessment” and provide a classified briefing to Congress about the potential harm done to national security.

In Phoenix, openly armed Trump supporters protested outside an FBI building, and in Cincinnati, a January 6 insurrectionist was killed after trying to breach an FBI field office armed with an AR-15 rifle. 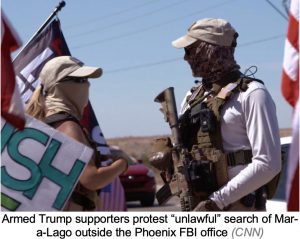 Violent online attacks against Garland, Reinhart, the agents involved in the search of Trump's residence, and other bureau employees and their families, prompted the FBI and Department of Homeland Security (DHS) to issue a joint intelligence bulletin warning of the increased threat landscape.

Last Wednesday, FBI Director Chris Ray, who was appointed by Trump, condemned the threats and calls for "civil war" and "armed rebellion" by right-wing extremists on the internet as “deplorable and dangerous," saying, "violence against law enforcement is not the answer.”

In the interim, Trump's "Truth Social" platform has exploded with vitriolic posts directed at the FBI, with top hashtags including #EndTheFBI, #DefundTheFBI and #FBIcorruption. Among the posts were threats by Ricky Shiffer, the man who was killed attempting to break into the Ohio FBI building. It was finally taken down after his death. The rest remain online, unchecked.