The deadline for qualifying for the Democratic National Committee's third Democratic primary debate is tonight and, although yet to be formally announced, participants have been narrowed to one night of ten contenders. 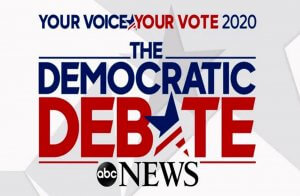 The televised debate, to be held in Houston, Texas on September 12th, and hosted by ABC, is one of 12 official party debates over the course of the 2020 presidential cycle.

The first debate, hosted by NBC and also aired on Telemundo, was held in Miami, Florida June 26th and 27th. It broke records with 15.3 million viewer tuning in the first night, and 18.1 million the second night.

The second debate, hosted by CNN July 30th and 31st in Detroit, Michigan, drew 8.7 television viewers the first night and 10.7 million the second.

With the top tier sharing the stage together next month for the first time, however, those numbers are expected to increase.

How It Works
The first and second debates fell under the DNC's new debate requirements, announced in February, of meeting a polling threshold of 1% or a fundraising requirement of at least 65,000 individual donors. 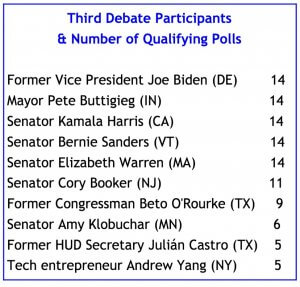 For the third and fourth debates in the Fall, however, the DNC upped the ante, automatically narrowing the field.

Qualifiers must meet both the new polling requirement of now 2% in four major polls, and the grassroots fundraising qualifications, now doubled to 130,000.

Unlike the first debate, which spread a large field of 20 candidates over two consecutive nights, the third is narrowed one night of ten.

Candidates will have one minute and 15 seconds to answer questions, and 45 seconds for rebuttals.

Not in the Debate: Billionaire activist Tom Steyer and Congresswoman Tulsi Gabbard, who were next in line with 3 and 2 qualifying polls respectively, but not enough to make the grade.

DemDaily: The Final Primaries: The House

All 435 seats in the US House of Representatives are up (Rs:246/Ds:187/2 vacancies) and, while the chances of wrestling control of the House from the Republicans is unlikely, we have learned...