Yesterday kicked off three days of opening arguments by impeachment managers and the President's legal defense team in the impeachment trial of President Donald J. Trump.

Day One
The organizing resolution, or rules governing the impeachment trial, were adopted Tuesday night at 2:00am, following 13 hours of debate on day-one of the historic proceedings. 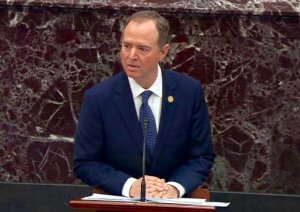 The approved rules call for each side to receive up to 24 hours to argue their case, spread over three days, starting with the House Managers.  Further debate and votes on whether to call witnesses are postponed until after the completion of presentations.

Day Two
On Wednesday, House Intelligence Committee Chair Adam Schiff (D-CA), who spoke eloquently and decisively, led the close to nine hours of oral arguments by the seven House Impeachment Managers, walking through in detail the facts of the case against Trump.

Abuse of Power: Trump pressured a foreign country to interfere in our election on his behalf, risking our national security in the process. That is a violation of his constitutional oath and an impeachable offense. 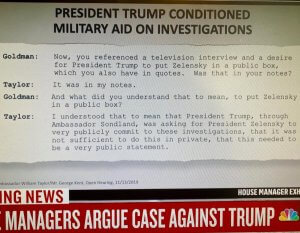 * On the July 25 call with Zelensky, Trump asked Ukraine to "do us a favor" and investigate a conspiracy theory about the 2016 election and his political opponent.

* Ambassador Sondland, who "followed the president's orders," told Ukraine the military aid they had been promised would not be released, and they would not get the White House meeting they sought, until they announced the investigations Trump wanted.

* Former Ambassador Bill Taylor told investigators that Trump made the release of military aid contingent upon Ukraine announcing those investigations, and called that demand "crazy."

* Congress made 71 specific requests or demands for documents - not a single one was turned over. 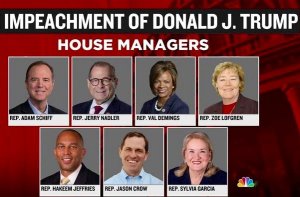 * Trump refused to participate in the House proceedings and directed everyone in his administration to ignore lawful subpoenas and all specific, individualized requests for documents.

* Trump was impeached because of overwhelming and irrefutable evidence that Trump abused his power and obstructed Congress.

Throughout the presentation Managers utilized exhibits of documents and televised testimony of other witnesses and experts from the House hearings to underscore their case. In addition to that of administration, foreign service and security council officials, were clips of Trump's own self-damaging words.

Schiff also attempted to appeal to the honor and duty of all Senators present who have sworn to "do impartial justice " in casting their votes.

Next Up
The trial continues today, Thursday, January 23rd at 1:00pm ET. Democrats are expected to focus on the Article 1 charge of Abuse of Power.

Tuesday night, President Trump announced “the winner” of his nomination choice to the United States Supreme Court as Neil Gorsuch of the 10th Circuit Court of Appeals in Colorado.