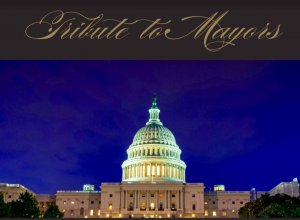 Amidst the other powerful events of the last week, over 350 elected officials, corporate and public leaders met at the Mayflower Hotel in Washington, DC for the 32nd annual Tribute to Mayors event, hosted by the Latino Leaders Network.

More than 70 Mayors were present, in town for the Winter Meeting of the US Conference of Mayors, the official non-partisan organization of Mayors representing cities with populations of 30,000 or more.

The popular annual event kicked off with remarks by US Conference of Mayors President Bryan Barnett and special guest Mayor Regina Romero, the first Latina Mayor of Tucson. 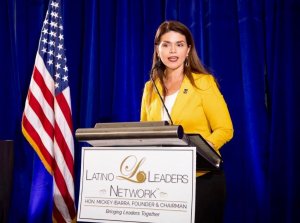 San Jose Mayor Sam Liccardo was honored with The Antonio Villaraigosa Leadership Award, presented to a mayor from a city with a significant Latino population who has exhibited an outstanding commitment to bringing diverse communities together.

Villaraigosa himself presented the award to Liccardo, praising his work with the census, affordable housing, the homeless, education and increasing diversity in the San Jose government.

Liccardo echoed the words of the other speakers in thanking LLN Chair Mickey Ibarra for dedicating "his life's work to improving opportunity for others." He then eloquently and emotionally spoke of La Frontera, or the border.

Liccardo said Frontera communities are those "seemingly at the intersection of two worlds, featuring the collision of two cultures, the juxtaposition of two realities...particularly for 11 million of our brothers and sisters who struggle daily in the shadows of their undocumented status." 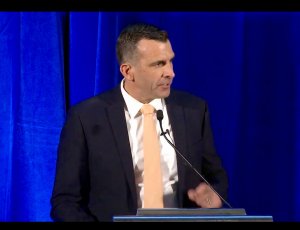 He appealed to the audience, "We must lift the aspirations and opportunities of those who have endured the hardships of the Frontera...to demonstrate the painfully stark implications of a house divided, revealing how the Frontera has become a metaphor for a nation of deeply estranged people."

Congressman Tony Cardenas of California was presented with the Chairman's Award for outstanding leadership in public service.

LLN Chair Mickey Ibarra praised Cardenas, who is the first person of color to be elected from the San Fernando Valley, for his "commitment to the Latino community as Chairman of the Congressional Hispanic Caucus BOLD PAC and for securing over $650 million for new school construction in Los Angeles. He invests his time and resources towards the betterment of his constituents, our community and the nation." 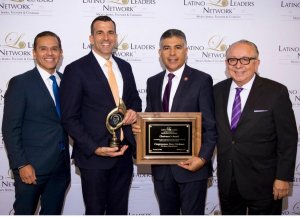 Like Liccardo, Cardenas made a passionate appeal to the audience, "We need to double down, triple down, quadruple down on mentoring. From the left of us, to the right of us, to those people who need us to be their example...Every time I speak my job is to speak the truth and to some how, some way, inspire."

The dinner also brought the announcement of the Latino Leaders Network's partnership with the California Global Education Project in producing a unique curriculum guide for high school and college educators.

The guide accompanies 14 of 33 keynote addresses delivered at the Latino Leaders Luncheon series, as featured in Latino Leaders Speak: Personal Stories of Struggle and Triumph.

It is an innovative new tool for engaging and inspiring the next generation of leaders by learning through the powerful stories of Latino leaders from all backgrounds. 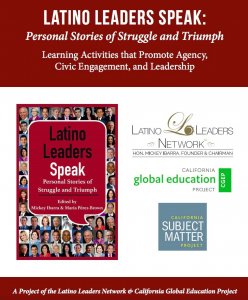 There are 60 million Hispanics and Latinos living in the United States, comprising 18% of the US population.

Of those, a record 32 million Latinos are projected to be eligible to vote on November 3, 2020.

Let your voice be heard and your legacy be felt.

September 12, 2019 Tonight is the Democratic National Committee’s third Democratic primary debate, one of 12 official party debates over the course of the 2020 presidential cycle. The...