The Mayors of Puerto Rico were honored Thursday night before a packed room of national dignitaries at theLatino Leaders Network Tribute to Mayors in Washington, DC. 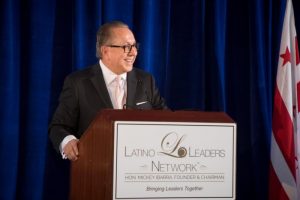 The event highlighted Puerto Rico's ongoing struggle for recovery and resources since its near-destruction by Hurricanes Maria and Irma in September.

Mayor Carmen Yulín Cruz of San Juan and Mayor María "Mayita" Meléndez of Ponce accepted the Antonio Villaraigosa Leadership Award on behalf of their colleagues - presented for their outstanding leadership in the face of the disaster.

Over 350 powerhouse guests filled the ballroom of the Mayflower Hotel, including representatives from the Congressional Hispanic Caucus Institute, UnidosUS, MALDEF, Voto Latino, Victory Institute, and NALEO and other organizations that advocate on behalf the 52 million hispanics and latinos living in the United States. 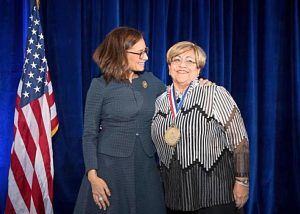 The second-largest ethnic group in the United States, the latino community compromises approximately 17% of the US population and over 10% of the voting electorate. The powerful voting block includes 5+ million Puerto Ricans living on the US mainland.

The LLN event followed a tumultuous week of politics around immigration reform that included a government shutdown over the status of "Dreamers" or Deferred Action for Childhood Arrivals (DACA), and a subsequent public attack on "Sanctuary Cities" by the US Department of Justice (DOJ).

The nation's Capitol was also host this week to the bipartisan US Conference of Mayors (USCM), several of whom have been past LLN honorees, including Mayors Jorge Elorza (Providence), Ken Miyagishima (Las Cruces), Eric Garcetti (Los Angeles), and former Mayors Stephanie Rawlings-Blake (Baltimore), Wellington Webb (Denver) and Marty Chavez (Albuquerque).

The Los Angeles Mayor, who represents the country's largest latino constituency, was forceful in his message to the Trump Administration. 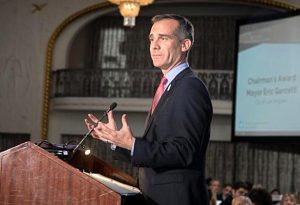 Mayor Garcetti: "These are tough times, these are moments when we are tested"

Top Sponsors include Bank of America, Southwest Airlines, Walmart, GEICO and Verizon, who have also contributed millions of dollars in support for families in Puerto Rico. 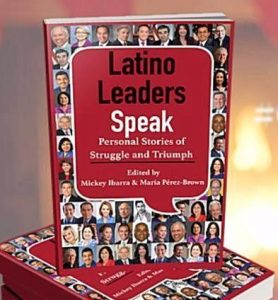 Recommended: Latino Leaders Speak: Personal Stories of Struggle and Triumph
A collection of 33 keynote addresses by some of our country's most prominent Latino voices -- elected officials, labor, administration, business and faith leaders, an astronaut, journalist, athlete, artist, author and other activists -- who have paved the way for future generations.

October 11, 2022  Georgia elections once again dominated the headlines with the new allegations against Senate candidate Herschel Walker (R) of paying for the abortion of a woman who also later...

August 18, 2020 Last night kicked off “Uniting America,” our country’s first virtual convention with a blending of performances, speeches and inspirational messages that...