On the heels of the other powerful events of the last two weeks, the nation's leading Latino leaders came together virtually this week to pay tribute to some of their colleagues, and to discuss the issues facing the Latino community. 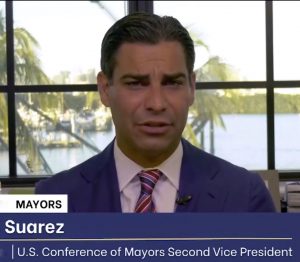 Suarez was the 2019 recipient of the Leadership Award

The first featured speaker, President of the US Conference of Mayors and Mayor of Louisville, Kentucky, Greg Fisher, praised Romero's leadership, followed by an open appeal, saying, "the only way we can face the challenges and opportunities ahead of us as a nation is by lifting each other up and working hard." Quoting his state motto, Fisher said, "'United we stand, divided we fall,' so let's stand together."

U.S. Conference of Mayors Second Vice President Francis Suarez, the 43rd Mayor of Miami, hailed Romero as a "dynamic leader, a passionate advocate for the people, and an outstanding example" of why it is so important that we continue to elect Americans of Latin heritage at the local, state and federal government.

Speaking to the national audience, Suarez also congratulated President Biden and offered the "support of America's mayors to unify our nation once again."

Los Angeles Mayor Antonio Villaraigosa, for whom the leadership award was named, presented the honor to Mayor Romero, in recognition of her "outstanding commitment to bringing diverse communities together.

"Just a few short days after the assault on our Capitol and, more importantly, the assault on our democracy... what we need right now are uniters, people like Regina, who understand that our cities, our states and our country thrive on the fact that we come from every corner of the earth to live out this dream we call the American dream." 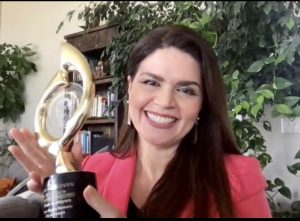 Regina Romero, the only Latina Mayor among the country's 50 largest cities, "Now is the time to be bold"

Latina Leaders Panel
In an engaging and substantive panel and live Q&A moderated by award-winning journalist Maria Elena Salinas, Romero and Unidas President Janet Murguía discussed Romero's career and the issues that inspired her to run for office.

That included her role, and that of the Latino community, in the historic flipping of Arizona that helped propel President Joseph Biden and Vice President Kamala Harris to victory in the 2020 elections.

Romero has proven herself to be a champion for issues such as acting boldly on climate change, affordable housing, infrastructure investment, workers' rights and access to a high-quality education.

It was anti-immigration laws being passed in Arizona a decade ago, however, and the assault on Latinos that forced "many of us to wake up and start organizing statewide and build partnerships and coalitions throughout the state to register people to vote," said Romero.

Murguía emphasized, "In order to keep our community engaged and invested in the future of our democracy, they need leaders and investments that show how they're part of that future vision of America...that is why having elected officials at the local and state level can be so important.

"Believe me Mayor Romero will not just be Mayor, she will be Governor of Arizona and maybe one day she'll be the President. That's my hope and that's my dream."

It is an innovative tool for engaging and inspiring the next generation of leaders by learning through the powerful stories of Latino leaders from all backgrounds, and is now offered to schools across the nation free of charge.

The guide accompanies Latino Leaders Speak: Personal Stories of Struggle and Triumph, a book filled with highlights from the 33 keynote addresses delivered at the Latino Leaders Luncheon series.