In a historic move Friday, the AFL-CIO elected its new President, Liz Shuler, making her the first woman to lead the nation's largest labor federation. 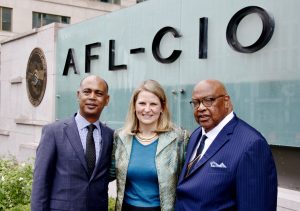 Shuler, who has served as the organization's Secretary-Treasurer since 2009, will serve out the remaining term of legendary leader Richard Trumka, who unexpectedly passed away August 5th.

She was elected by acclamation by the AFL-CIO's Executive Council, comprised of the leadership of member unions, and will face reelection in a vote by convention delegates next June in Philadelphia.

Rising Through The Ranks
A native of Gladstone, Oregon, Liz Shuler grew up in a union household where her father, Lance, a member of the International Brotherhood of Electrical Workers Local 125, worked as a power lineman. Her mother, Joyce, worked as an estimator in Portland General Electric's service and design department. 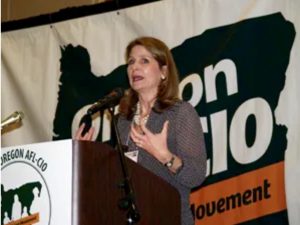 After graduating with a bachelor's degree in journalism from the University of Oregon in 1992, Shuler was hired as the only female organizer at Local 125, to help wage a campaign to unionize PGE's clerical employees. Shuler, who had worked summers in PGE's payroll department, had witnessed first-hand the disparity in respect and power between unionized and non-unionized employees, particularly among women workers.

As a union representative Shuler traveled across the local's multi-state jurisdiction, conducting organizing trainings for its 36 bargaining units, developed a political action committee and helped bolster the union's legislative power at the state level. 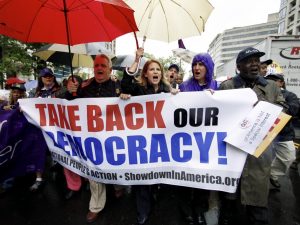 The now-bankrupt corporate giant's subsequent fraud and abuse scandal resulted in bankruptcy and the decimation of the pensions of thousands of union members, including that of her own father.

In 1998, Shuler was tapped to help lead the AFL-CIO's successful effort to defeat California's "Paycheck Protection" Proposition 226, which would have denied dues check-off to public employees belonging to unions and required all union members in the state to annually give their assent before any portion of their dues could be used for political purposes.

Her performance prompted IBEW President Jack Barry to hire her as an international representative in the union's national Political and Legislative Affairs Department in Washington, D.C., where she lobbied Congress, developed political education, mobilization and election programs, expanded the Political Action Committee and worked to elect more women to Congress.

In 2004, she was promoted to assistant to International President Ed Hill to drive the agenda of the nearly one-million member union, making Shuler the highest-ranking woman in the union's history. 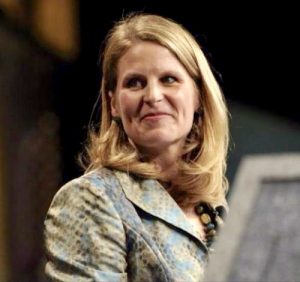 She oversaw program implementation and strategy, the work and budgeting of 11 departments. She also played a key role in advancing the IBEW's Code of Excellence, committed to "quality work to show that unions make a difference not only for workers and their families, but also for our employer partners."

The Next Generation of Leadership
In 2009, then-AFL-CIO Secretary-Treasurer Richard Trumka, seeking election to the labor federation's presidency, chose Shuler as his running mate for Secretary-Treasurer. The two were successfully elected at the AFL-CIO's September convention, along with Arlene Holt, who was reelected as Executive Vice-President.

Shuler became the first woman elected to the position of Secretary-Treasurer and, at 39, the youngest woman ever on the federation's Executive Council.

As Secretary-Treasurer, she served as the chief financial officer and is credited with turning deficits into surpluses and steering the federation through multiple fiscal crises, including the COVID-19 pandemic. Shuler also led the AFL-CIO's initiatives on the future of work, retirement security, the clean energy economy, public safety reform, workforce development, and empowering women and young workers. 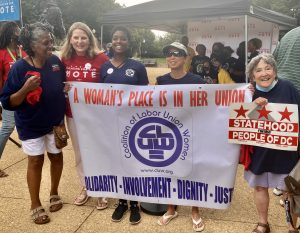 Shuler led the launch of the AFL-CIO's Next Up Young Workers Initiative which includes young worker councils and coalitions across the country, and an emphasis on technology as a tool for strengthening worker voices and relevance in the changing economy.

Shuler has also served on the boards of the National Women's Law Center, Institute for Women's Policy Research, AFL-CIO Housing Investment Trust, Alliance for Retired Americans, the Solidarity Center, and the Committee on Worker's Capital and Women's Committee of the International Trade Union Confederation.

January 20, 2017 Washington, DC was oddly quiet this morning — as if waiting and watching for the impact of today’s Inauguration to become a reality. You could see it in the diverse...