While the public and pundits are focused on the viability of Democratic presidential contenders through their fundraising and polling numbers, another sign of early credibility is the endorsement of elected officials and organizations.

Among the most valuable of those, with the ability to deliver virtually millions of dollars, manpower and votes, is organized labor. 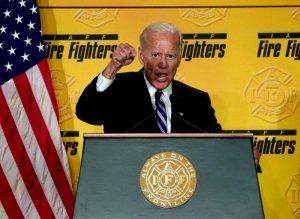 IAFF, which is supporting Joe Biden, is the only national union to endorse so far (Reuters/K.Lamarque)

While the courtship for labor's support is in full force, unions are not expected to jump into the race anytime soon. In the 2016 presidential contest, early national endorsements of then-frontrunner Hillary Clinton caused consternation among some rank and file members who supported Bernie Sanders or Donald Trump.

The endorsement process has traditionally been one made by union leadership who, in some cases, struggle to convince their membership to vote in their best interests.

For 2020, most of the major unions are inviting candidates to speak early on at their conferences and are more openly engaging their members in the process.

In April, the North American Building Trades Unions (NABTU), a coalition of 14 construction trade unions, many of which represent blue-collar workers from crucial swing states, had nine presidential contenders address their members at their annual legislative conference.

This month, the United Mine Workers of America invited each of the Democratic presidential hopefuls to go "underground" to tour a coal mine. A majority of the candidates support a form of the Green New Deal which would displace coal production in favor of energy alternatives. Despite candidate Trump's 2016 pledge to prioritize mineworker jobs, fifty coal-fired power plants have closed under his administration. 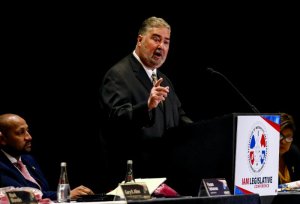 IAM President Bob Martinez, "If you want IAM's endorsement, don't talk to me, talk to our members" (pic: Andy Hounshell)

The International Association of Machinists & Aerospace Workers (IAM), North America's largest airline & rail labor union, and which was the second national union to endorse Clinton in 2016, is taking a unique approach.

IAM, for the first time, is providing their members the opportunity to vote online, through an independent firm, for a candidate of their choosing. Later, members, through their states councils, will decide who the IAM endorses for president.

The labor movement is a powerful force in any contest, but in a presidential election the timing and impact of major union endorsements could decide who becomes our Democratic nominee.

February 1, 2021 Biden and Harris are in the house! The 46th President and his Vice President are settled in the White House, along with the senior staff and advisors that make up their inner...

If you are, then you should know about the Women’s Information Network — and WIN’s Annual “Young Women of Achievement Awards” this Thursday, February 25th