The labor movement, and the country, lost a legendary leader this week with the passing of former AFL-CIO President John Sweeney. 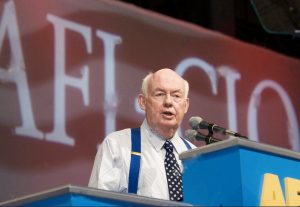 Sweeney, who served for five terms as President of the nation's largest federation of unions, was credited with transforming the AFL-CIO into a political powerhouse more firmly aligned with the Democratic Party, as well as with civil rights, environmental and anti-poverty groups.

His career paralleled the modern history of the labor movement, including the transitions and challenges of the 1990's and 2000's.

Born in the Bronx in 1934 to Irish immigrants, Sweeney grew up going to union meetings as a child with his father, a city bus driver and member of the Transport Workers Union.

Although he graduated from Iona College in New Rochelle in 1952 with a degree in economics, his commitment to the labor movement led him to take a job with the International Ladies' Garment Workers, which later merged with the Clothing and Textile Workers Union. 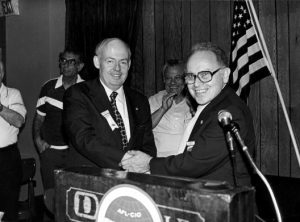 He joined the Building Service Employees International Union Local 32B in New York City in 1961 as a union representative, and rose within the ranks to be elected president in 1976.

Three months after taking office, Sweeney famously led the 45,000 members of SEIU, which represented most of the city's janitors, out on a surprise strike a day before the union's contract was due to expire, successfully winning a new contract with significant wage and benefit increases.

He was elected President of the Service Employees International Union President in 1980, pushing for rapid expansion into organizing new sectors including office workers, nursing home workers, and maintenance workers in the health care field and business offices. Sweeney also pushed for mergers with other unions, absorbing the National Association of Government Employees and other public employee unions. 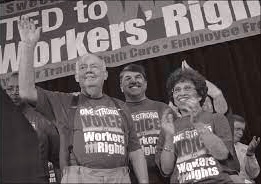 During his 15 years as President, SEIU grew from 625,000 to 1.1 million members, the first AFL-CIO union to reach the million-member mark in more than 20 years.

In 1995, in the first competitive election in AFL-CIO history, Sweeney successfully won the national presidency, leading a dissident slate committed to reversing the federation's declining membership and waning political power.

Sweeney subsequently guided the AFL-CIO through the largest schism in labor's ranks since 1930, when, in 2005, seven unions left the federation over the future of organizing in the labor movement. 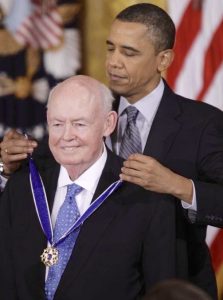 Despite the unrest, Sweeney was reelected in 2005, and before his retirement in 2009, three would reaffiliate with the AFL-CIO.

Today, the AFL-CIO has 55 affiliated unions and 12.5 million members, including 3.2 Million members in Working America, its community affiliate.

In 2000, Sweeney also was elected president of the Trade Union Advisory Committee (TUAC), an international organization with affiliates representing some 70 million workers and more than 55 national trade union centers in 29 countries.

In 2011, John Sweeney was awarded the Presidential Medal of Freedom by President Barack Obama, and in 2016, he received the "Roving Ambassador for Peace" award from the World Peace Prize Awarding Council for "his long-standing devotion to social justice and fair employment opportunities for American workers."