The SetUp: In one of the most anticipated public testimonies in decades, the Senate Judiciary Committee held an additional day of hearings yesterday on President Trump's nominee to the US Supreme Court.

The star witnesses were Dr. Christine Blasey Ford and the nominee, Judge Brett Kavanaugh, whom Ford has accused of sexually assaulting her while they were in high school.

The Hearing
As the party in the majority, the process was dictated by the Republicans. 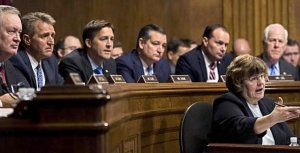 In breaking with the normal procedure, the eleven, all white, all male GOP members of the committee chose to have an outside attorney represent them in posing the questions. By outsourcing the questions, there was no recorded visual of members -- several of which are in competitive re-election races -- drilling a female victim of sexual assault.

Mitchell posed the questions to Ford and Kavanaugh in five minute periods, the time allocated to each individual committee member. The ten Democrats, which include four female Senators, asked their own questions directly.

Ford Highlights
Dr. Ford's thoughtful and sometimes emotional testimony further boosted her credibility and the public perception of the intelligent, attractive academic as a legitimate victim of sexual assault.

The polite and almost demur Ford, who passed a lie detector test, shakily detailed her alleged assault by Kavanaugh with the pained dignity of a reluctant witness.

Ford: "I am terrified. I am here because I believe it is my civic duty."

Ford, a psychology professor and research psychologist, also spoke knowledgeably to the symptoms of anxiety and PTSD that survivors of trauma experience, including her own suffering. 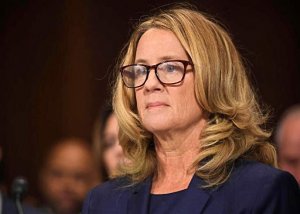 Democratic Senator Patrick Leahy (D-NY):  "What is the strongest memory you have? The strongest memory of the incident, something that you cannot forget?"
Ford:  Indelible in the hippa campus (memory) is the laughter. The uproarious laughter between the two and their having fun at my expense.
Leahy:  You've never forgotten that laughter. You've never forgotten them laughing at you?
Ford:  They were laughing with each other.
Leahy:  And you were the object of the laughter?
Ford:  I was underneath one of them while the two laughed. Two friends having a really good time with one another.

Senator Dick Durbin (D-IL): "Last night the Republican staff of this Committee released to the media a timeline that shows that they have interviewed two people who claim they were the ones who actually assaulted you. I am asking you to address this new defense of mistaken identity directly.
Dr. Ford, with what degree of certainty do you believe Brett Kavanaugh assaulted you?
Ford: 100%.

At the close of questioning, few thought that Kavanaugh would be able to recover from Dr. Ford's compelling testimony.

Kavanaugh Highlights
Judge Kavanaugh came out swinging, vehemently denying at the outset the allegations. In an emotionally charged, often angry delivery, he depicted his high school experience as one of church-going innocence, academic achievement and athletic leadership. 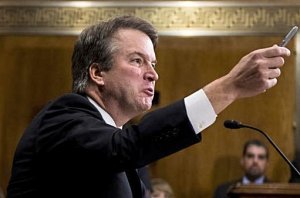 Kavanaugh also detailed his lengthy resume including his service as Counsel and Staff Secretary to President George W. Bush, his years as a federal judge, and related character testimony of colleagues and friends.

But it was his quivering voice in painting the processes' devastation to his family, and the story of his ten year-old daughter telling him that "we should pray for the woman" that pushed the nominee and many in the gallery to tears.

Despite the compelling narrative, Kavanaugh also played the part of aggressive litigator, at times slipping into a less than judicial temperament with angry exclamations of "phony," "I am innocent," and threats to perceived political persecutors of huge repercussions on the court.
Kavanaugh: "What goes around, comes around."

Kavanaugh: "This whole two-week political effort has been a calculated and orchestrated political hit, fueled with apparent, pent up anger about President Trump and the 2016 election; fear that has been unfairly stoked about my judicial record, revenge on behalf of the Clintons, and millions of dollars in money from outside, left-wing opposition groups."

Senator Dianne Feinstein (D-CA): Regarding Kavanaugh's female accusers, two of whom have not been permitted to testify, "Are you saying that the allegations by Dr. Ford, Ms. Ramirez and Ms. Swetnick are wrong?"
Kavanaugh: "That is emphatically what I am saying. Emphatically. The Swetnick thing is a joke... a farce."

Further into the hearing, Senator Lindsey Graham (R-SC) broke the GOP wall of silence, launching into a vitriolic rant about the unfairness of the hearing to Kavanaugh. "If you are looking for a fair process, you came to the wrong town at the wrong time."

Politically, the two testimonies were considered a draw. While Ford's testimony appealed to the Democratic base, and further fueled a growing "MeToo" movement, Kavanaugh's fiery denial and cries of political persecution appealed directly to President Trump and his followers. 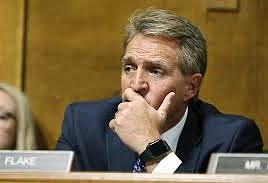 The Committee Vote
At 1:55pm today the Judiciary Committee voted 11-10 along straight party lines to confirm Kavanaugh's nomination to the US Supreme Court.

However, despite his vote to advance the nomination from the Committee, GOP Senator Jeff Flake (AZ) requested, "in an effort to bring this country together," that the Senate delay a full vote for a one-week investigation by the FBI of the new allegations.

In doing so, Flake has essentially held up his vote in the full Senate, one that is necessary for confirmation by the upper chamber, where Republicans hold only a two-vote majority.

The request needed approval by President Trump who, on Grassley and Graham's advice, at 5:00pm approved a "supplemental investigation" on Kavanaugh, to be completed in less than one week.

The Final Vote
With a 51-49 Republican majority in the US Senate, it will require the vote of all Democrats, as well as two Republicans, to secure the simple majority of 51 to defeat Kavanaugh's nomination. If there is a tie, Vice President Pence, officially the President of the Senate, will cast the deciding vote.

In modern times there has never a straight partisan vote on a Supreme Court nominee.

Republicans: Should Flake, or moderate Senators Susan Collins or Lisa Murkowski, vote against Kavanaugh on the full vote, then the nomination is permanently defeated. The process for another nominee would then begin, which would most likely go to a vote after the midterms elections. 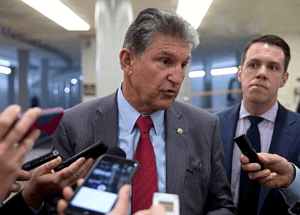 Joe Manchin (D-WV) may cast the next key vote

Democrats: If just two of the three swing Republicans, and one Democrat, vote against confirmation, it would bring the vote to 50-50, providing Vice President Pence to cast the tie-breaker in Kavanaugh's favor.

For endangered Republicans worried about alienating independents and moderate female voters, the investigation should be good news, providing political cover in mediating a fair process.

For Democrats, this provides another opportunity to defeat Kavanaugh's confirmation and delay consideration of a new nominee until after the election when they may have control of the Senate, and therefore, control of the votes on that nomination.

The investigation may also restore some faith to what has already been one of the most historically damaging and politically-driven degredations of an otherwise democratic process.

That chapter has yet to be written.

November 3, 2022 With just five days until the election, candidates and the parties are saturating the airwaves nationwide in an attempt to get their message out to undecided voters. According to...