The House Select Committee on the January 6th Attack met for the final time Monday, releasing the findings of its 18-month investigation into the violent insurrection at the US Capitol.

In their conclusions, the committee recommended four referrals for criminal prosecution of former President Donald Trump to the Department of Justice for his leading role in a "sophisticated seven-part plan to overturn the presidential election and prevent the transfer of power."

In his opening statement, Chairman Bennie Thompson (D-MS) said, "Accountability can only be found in the criminal justice system. We have every confidence that the work of this committee will help provide a roadmap to justice and that the agencies and institutions responsible for ensuring justice under the law will use the information we've provided to aid in their work."

Co-Chair Liz Cheney said every president in American history has fulfilled their constitutional duty to transfer power peacefully to the next, “except one.”

"In addition to being unlawful," Trump's actions on January 6, 2021 "were an utter moral failure and a clear dereliction of duty. In our work over the last 18 months," said Cheney, "the Select Committee has recognized our obligation to do everything we can to ensure this never happens again."

"No man who would behave that way, at that moment in time, can ever serve in any position of authority in our nation again. He is unfit for any office."

In the 40-minute presentation, the remaining seven committee members laid out components of the evidence, most of which had been presented in nine powerful public hearings between June 9 and October 13, 2022.

Their exhaustive work spanned millions of pages of documents, emails, text and phone records, along with nearly 1,200 interviews and the testimony of those closest to Trump in the White House, his campaign and his family.

Trump used these lies to raise hundreds of millions of dollars, some of which was used illegally to defend his case -- including bribing at least one witness. Trump lawsuits were struck down in 61 subsequent court cases, many of which included scathing denunciations by judges of the ex-president's false allegations.

2) State Pressure Campaign
Congressman Adam Schiff (D-CA) detailed the “campaign of coercion” and pressure applied by Trump and his enablers to Georgia Secretary of State Brad Raffensberger and other state and local election officials -- including threats of criminal prosecution if they didn’t meet his demands.

Schiff also outlined the “fake electors plan” advocated by outside counsel John Eastman and others to replace certified with pro-Trump electors, as evidenced by false documents transmitted to multiple levels of government officials. Trump and his cohort planned to take advantage of the confusion stemming from "competing" electors to reject the election's outcome.

3) Department of Justice Pressure Campaign
Congressman Adam Kinzinger (R-IL) described Trump’s efforts to pressure the DOJ “to investigate and prosecute purported election fraud and to help him convince the public that the election was stolen.”

The false allegations were disavowed by Attorney General Bill Barr, who resigned. This led Trump to instruct Barr’s successors, Acting AG Jeffrey Rosen and Acting Deputy AG Richard Donoghue to “just say the election was corrupt and leave the rest to me and Republican Congressmen.”

They repeatedly rejected any findings of election fraud, after which Trump attempted to install “a loyalist,” Jeffrey Clark, who drafted a letter to go to various states claiming DOJ had “identified significant concerns about the election results in their states,” and encouraging them to convene their state legislatures to appoint Trump -- rather than Biden -- electors. The White House counsel called the letter “a murder-suicide pact” and Trump relented in not appointing Clark only after senior White House and DOJ officials threatened to resign en masse.

4) Vice President Pence Pressure Campaign
Congressman Pete Aguilar (D-CA) outlined an “unprecedented pressure campaign” by Trump and Eastman “to coerce Vice President Mike Pence” into illegally declaring Trump's victory, based on a mistaken theory that the vice president has the ability to override the electoral process.

Trump repeatedly berated and threatened Pence, who consistently resisted, saying he did not have the authority to supplant certified state electors.

After Pence’s final rejection of the scheme the morning of January 6th, an infuriated Trump, at 2:24pm, tweeted that Pence "did not have the 'courage' to do what needed to be done", escalating the violence and death threats against Pence already underway at the Capitol.

5) Summoning the Mob
Congresswoman Stephanie Murphy (D-FL) delineated Trump’s actions leading up to January 6 in summoning the mob of his supporters to Washington, “hoping they would pressure Congress to do what he could not do on his own.”

In a series of tweets between December 19 and January 6, Trump galvanized domestic extremist groups like the Proud Boys, Oath Keepers and other organized militia groups to disrupt certification of the election for Joe Biden.

Trump ignored “the substantial evidence” gathered by the FBI, the Secret Service, US Capitol police, DC government and other law enforcement agencies warning of the risk of violence at the Capitol during the joint session. He also rebuffed numerous efforts by senior advisors to issue a preemptive tweet encouraging non-violence at the event.

6) 187 Minutes: Dereliction of Duty
Congresswoman Elaine Luria (D-VA) described how Trump, speaking on the ellipse the morning of January 6, "told tens of thousands of angry supporters that the election was stolen, that they had the power to change that if they marched to the Capitol. That they wouldn't have a country anymore if the presidency was taken away from him."

As the crowd descended on the Capitol, Trump watched it on television, ignoring "pleas from his senior advisors, lawmakers on the Hill, and even his own children," to Issue a public statement to his followers to disperse and leave the Capitol.

For 187 minutes, from 1:10pm to 4:17pm, Trump actively spurned "his constitutional duty to take care that the laws are faithfully executed" and ensure the peaceful transition of power. At no point did Trump contact or deploy any law enforcement agency to impede the riot.

Finally, three hours after the onset of violence at the Capitol, Trump released a video statement that reiterated his claim that the election was stolen, told his supporters that he loved them, and ultimately suggested they disperse.

"In summary, said Luria, President Trump lit the flame, poured gasoline on the fire, and sat by...for hours watching the fire burn. And today, he still continues to fan those flames."

7) Criminal Referral of President Donald J. Trump to the Department of Justice
Congressman Jamie Raskin (D-MD) began by noting that "the dangerous assault on American constitutional democracy that took place on January 6, 2021 consists of hundreds of individual criminal offenses. Most such crimes are already being prosecuted by the Department of Justice...Ours is not a system of justice where the foot soldiers go to jail and the masterminds and ringleaders get a free pass."

Raskin proceeded to detail the criminal referrals against Trump and co-conspirators, as described earlier by his committee colleagues:

Any office holder who is convicted of participating in insurrection, noted Raskin, is automatically disqualified from ever holding public office again. He also said these are not the only statutes that are potentially relevant to former President Trump's conduct related to the 2020 election, but that is now in the hands of the Department of Justice.

The bipartisan panel released the 160-page executive summary of its report Monday, and is expected to release the full report Wednesday, including transcripts and more extensive materials collected in the investigation. 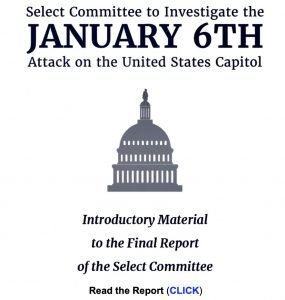 February 5, 2021 To Remind Us to Laugh On Trump’s last day “I don’t know what tomorrow’s gonna feel like. Probably like that moment when they pull the nasal swab out of...

February 3, 2021 Amid the dozens of executive orders issued by President Biden to reverse the ills of the Trump administration, is the January 20th order “Ensuring a Lawful and Accurate...