Explosive new testimony before the House Select Committee to Investigate the January 6th Attack yesterday provided shocking new revelations about the actions of former President Donald Trump the day of the Capitol insurrection. 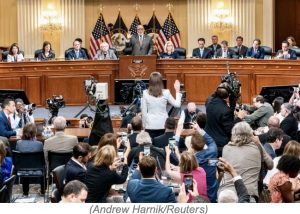 The appearance of Cassidy Hutchinson, a former Special Assistant to the President and principal aide to White House Chief of Staff Mark Meadows, came in a surprise announcement Monday from the committee, which was not expected to meet again until after Congress returns from recess July 12th.

The hearing was the sixth in a series of public sessions in which the committee has built a meticulous, compelling and powerful case around Trump's premeditated plan to overturn the presidential election and prevent the transfer of presidential power.

Most of the evidence to date has come from the testimony of Trump's former White House staff, legal and campaign advisors, and Hutchinson's was among the most damning. 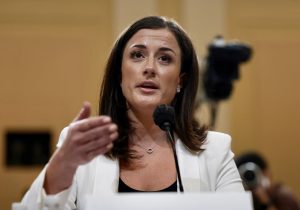 Hutchinson, 25, who previously worked for Congressman Steve Scalise (R-LA) and Senator Ted Cruz (R-TX), worked within feet of the Oval Office and had daily access to the President. She was also firsthand witness to many of the meetings and events leading up to, and the day of, the January 6th insurrection.

Hutchinson recounted conversations as early as late December, when Director of US Intelligence John Ratcliffe expressed concerns about fighting the results of the election and "that it could spiral out of control and potentially be dangerous, either for our democracy or the way that things were going for the 6th."

Committee Vice Chair Liz Cheney (R-WY) laid out the case that Trump and his advisors knew about the potential for violence before January 6th, showing a January 4 email received by Acting Deputy Attorney General Richard Donoghue from the National Security Division of the Department of Justice.

The email identified planning by those coming to Washington on January 6 to "occupy federal buildings" and discussions of "invading the Capitol building." In video deposition, Donaghue said, "We knew that if you have tens of thousands of very obsessive people showing up in Washington DC that there was potential for violence." 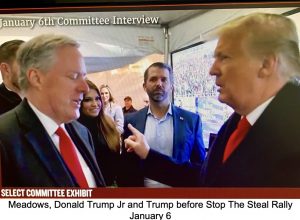 Cheney stated that the US Secret Service was also monitoring the situation, showing emails sent to White House Deputy Chief of Staff Tony Ornato and the head of the President's protective detail Robert Engel.

Cheney pointed to a January 3 Capitol Police assessment reporting that the Proud Boys and other white supremacist groups planned to be in DC on January 6 and that, "unlike previous post-election protests, the targets of the pro-Trump supporters are not necessarily the counter-protesters...but rather Congress itself."

Hutchinson testified to hearing "the word Oath Keeper and hearing the word Proud Boys closer to the planning of the January 6th rally when (Trump attorney) Rudy Giuliani would be around."

Giuliani told Hutchinson that something was planned for January 6 and that "we're going to the Capitol, it’s going to be great. The President is going to be there. He’s going to look powerful.” He added that Meadows “knows about it.” When Hutchinson asked Meadows about the reference, he said "things may get real, real bad Jan 6."

The committee alternated between video and live testimony from Hutchinson, who said both National Security Advisor Robert O'Brien and Ornato spoke to her about intel reports of potential violence at the Capitol. 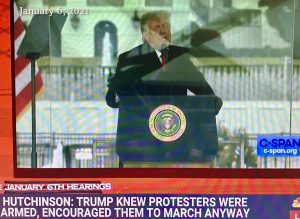 Turning to the morning of the Capitol attack, Cheney laid out in detail, as verified by Hutchinson, how Trump, Meadows, Ornato and other staff were informed in advance of the Stop the Steal rally that the mob of thousands came armed with "knives, guns in the form of pistols and rifles, bear spray, body armor, spears, and flagpoles."

Meadows, said Hutchinson, was unconcerned, "or at least did not act on those concerns."

Prior to leaving the White House for the rally, Hutchinson said she saw White House Chief Counsel Pat Cipollone, who thought that Meadows was pushing a Trump walk to the Capitol after the rally, saying, "Please make sure we don't go up to the Capitol, Cassidy. Keep in touch with me. We're going to get charged with every crime imaginable if we make that movement happen."

Backstage before the rally, the President was furious that the protestors with weapons were being blocked by security from entering the Ellipse in front of the White House. Trump said, "I don't care that they have weapons. Let the people in, take the f***ing mags (magnetometers) away. They’re not here to hurt me. Let my people in. They can march to the Capitol after the rallies are over," Hutchinson recounted.

Among the most disturbing revelations, however, were those of a volatile and angry president who regularly threw plates at walls in response to bad news, and who physically assaulted his Secret Service lead the day of the insurrection. When Engel refused to take Trump to the Capitol after the rally due to security concerns, the President tried to grab the steering wheel saying, I'm the f***ing president, take me up to the Capitol now," and lunged for Engel's throat.

Now back at the White House, and with the rioters having just broken into the Capitol, Hutchinson said Cipollone rushed into Meadows's office saying they need to see the President now. Unfazed, Meadows said the President "doesn't want to do anything." Cipollone said, "something needs to be done or people are going to die and the blood is going to be on your f***ing hands. This is getting out of control." 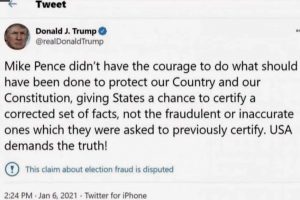 Afterward, in their office lobby, Hutchinson recounted Cipollone saying, "They're literally calling for the vice president to be f***ing hung. And Mark had responded something to the effect of, you heard him, Pat. He thinks Mike deserves it. He doesn't think they're doing anything wrong, to which Pat said something, this is f***ing crazy, we need to be doing something more."

Instead, at 2:24 pm, Trump tweeted during the riot that Pence did not have the “courage to do what needs to be done.” Hutchinson said, as a staffer, she felt “frustrated, disappointed. As an American, I was disgusted. It was unpatriotic, it was unAmerican. We were watching the Capitol building get defaced over a lie.”

Trump for hours refused calls from some staff and family to tell rioters to stand down, though not all in the White House agreed on a strategy moving forward.

Hutchinson testified that, at that point, there were three groups of thought. One, she said, "strongly urging him to take immediate and swift action” to condemn the rioters. That included Cipollone, Herschmann, White House Counsel Patrick Philbin and Ivanka Trump. 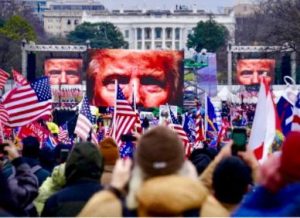 Another, "more neutral group...were trying to toe the line, knowing that Mr. Trump didn't necessarily want to take immediate action and condemn the riots, but knowing something needed to be done. And then there was the last group, which was 'deflect and blame.' Let's blame Antifa. These aren't our people." Meadows was in that group but relented to a more neutral stance.

At 4:17pm, Trump reluctantly released a video telling the rioters to go home and that "We love you, you're very special."

Hutchinson ended her testimony by speaking to the days that followed, including reports that Trump's cabinet secretaries were considering invoking the 25th Amendment to remove him from office - just two weeks before the end of his term. She also confirmed that Meadows, Giuliani and several members of Congress immediately sought presidential pardons for their part in the January 6 attack on the Capitol.

In closing, Cheney thanked Hutchinson for her courage in testifying, alluding to the possibility that others who have testified before the committee, or who had not come forward, had been the subject of witness tampering.

She showed statements from unnamed witnesses, including one who described phone calls from people interested in that witness' testimony. "What they said to me is as long as I continue to be a team player, they know I'm on the right team. I'm doing the right thing. I'm protecting who I need to protect, you know, I'll continue to stay in good graces in Trump World." "And they have reminded me a couple of times that Trump does read transcripts.

Next Up
July Hearings: TBD after the House returns from recess July 12.