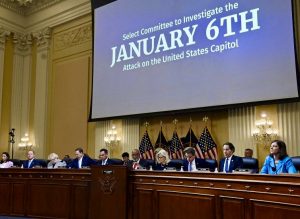 The House Select Committee to Investigate the January 6th Attack held its fourth in a series of hearings Tuesday, to present the findings of its year-long investigation into the events leading up to, and surrounding, the assault on the US Capitol.

The first hearing, held on June 9, provided a shocking narrative of the violence of that day, and a powerful preview of the sessions to come. Each hearing, said Vice Chair Liz Cheney (R-WY), will address how former President Donald Trump oversaw a "sophisticated seven-part plan to overturn the presidential election and prevent the transfer of presidential power."

The second hearing focused on how "Donald Trump and his advisers knew that he had in fact lost the election," but still "engaged in a massive effort to spread false and fraudulent information" that the election was stolen.

The third hearing focused on "President Trump's relentless effort to pressure Mike Pence to refuse to count electoral votes on January 6th," despite knowing his scheme was "illegal and unconstitutional." Then how Trump flamed the threat of violence against the Vice President's life as the insurrection was underway. 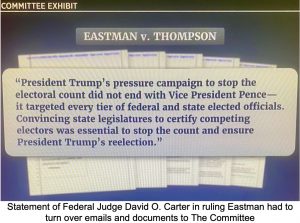 In what has become the pattern, Tuesday's hearing began with an overview from Committee Chair Bennie Thompson (D-MS), followed by a more directed opening statement from Cheney.

"Today we will begin examining President Trump's effort to overturn the election by exerting pressure on state officials and state legislatures.

"Donald Trump had a direct and personal role in this effort, as did Rudy Giuliani, as did John Eastman. The same people who were attempting to pressure Vice President Mike Pence to reject electoral voters illegally, were also simultaneously working to reverse the outcome of the 2020 election at the state level." Their actions, said Cheney "deserve attention both by Congress and by our Department of Justice."

Cheney and Congressman Adam Schiff (D-CA), who led the day's proceedings, reminded viewers that Trump knew that his stolen election allegations were unfounded. Video depositions from former US Attorney General Bill Barr and from Acting Deputy Attorney General Richard Donaghue, showed each testifying that they personally told the President that the election fraud "allegations had no merit," and that "dozens of investigations and hundreds of interviews" had been conducted and the "allegations are not supported." 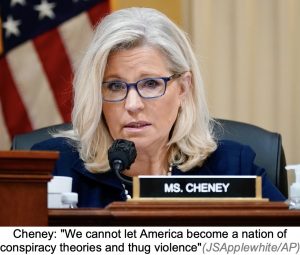 Trump also knew that the fake electors conspiracy contrived by Eastman and promoted by Giuliani, to convince states to name pro-Trump alternate slates of electors who would overturn the election, was illegal -- and dangerous.

Cassidy Hutchinson, former aide to then-White House Chief of Staff Mark Meadows, testified to a meeting where the White House Counsel's office advised Meadows and Giuliani that the plot was not legally sound.

Similarly, members of the Trump campaign's legal staff, including Matt Morgan and Justin Clark, also refused to participate in the plan.

Nevertheless, Trump and his allies continued with their public assault on the results in Arizona, Georgia and at least five other battleground states while pressuring state legislatures and officials to agree to the scheme. Millions were spent by the Trump campaign on ads pushing election fraud claims and calling on citizens to contact their elected officials and demand they inspect voting machines. They had an impact.

In Michigan, protestors outside Secretary of State Jocelyn Benson's (D) home called her a “tyrant and a felon,” as she was putting her child to sleep. 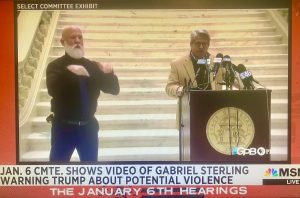 When Republican Pennsylvania House Speaker Brian Cutler had his attorneys tell Trump and Giuliani to stop calling, as their efforts were "inappropriate," former Trump advisor Steve Bannon announced a protest against Cutler at his home and offices.

Arizona Republican House Speaker Rusty Bowers, testifying in person, described to the committee the "20,000 emails and tens of thousands of voicemails and texts" he and his family faced after refusing to decertify his state’s election results.

Bower said he told Trump and Giuliani he would not go along with the illegal scheme, saying it went "against my oath." In a separate conversation, Eastman told Bowers, "just do it and let the courts sort it out." 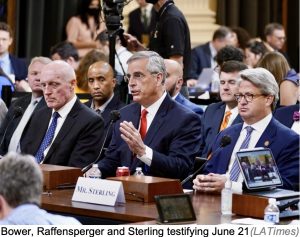 Video was shown of Gabriel Sterling, Chief Operating Officer for the Georgia Secretary of State's office, making a December 1, 2021 public appeal directly to President Trump in a press conference.

In his testimony, Georgia Secretary of State Brad Raffensperger described several conversations with President Trump in which he repeatedly rebuffed the president's efforts to overturn the election results and "find" enough votes to make him the winner.

In another call, Trump suggested it was "dangerous" for Raffensperger to declare there had been no criminality in the elections.

Raffensperger was condemned nationally by Republicans for refusing Trump, and received a censure from the Georgia Republican Party. Both Raffensperger and Sterling, and their families, were barraged with threats. 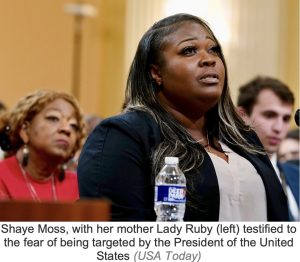 Recordings were also played of Trump's calls directly to the Georgia Secretary of State's chief investigator, Francis Watson, including one in which he said that if she was able to "find the right answer" she would be "praised."

The final witness was Wandrea ArShaye "Shaye" Moss, a ten-year election worker from Fulton County, Georgia. Moss and her mother, Ruby "Lady" Freeman, became the target of Trump after edited video of election workers was pushed out as baseless evidence of election corruption.

Trump and Guiliani named both women in tweets and interviews, calling them professional vote scammers. A tearful Moss provided moving and emotional testimony about the death threats and harassment that followed, forcing them into hiding for two months.

November 20, 2018 While House lawmakers await the outcome of their leadership elections next week, Senate Democrats re-elected their party leadership by acclamation during a closed-door caucus...

March 10, 2020 The endorsement of elected officials, newspaper, major labor and organizations, has traditionally been a major predictor of success for candidates in presidential primaries, but...