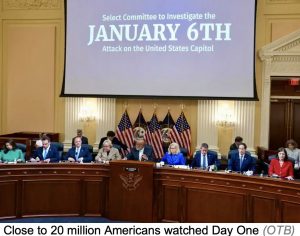 On Monday, the House Select Committee to Investigate the January 6th Attack held its second hearing to present the findings of its year-long investigation to the American people.

The first hearing, held on Thursday, June 9, provided a powerful and dramatic narrative of the "sophisticated seven-part plan to overturn the presidential election and prevent the transfer of presidential power," said Congresswoman Liz Cheney (R-WY), vice chair of the committee. "In our hearings, you will see evidence of each element of this plan."

Capitol Police Officer Caroline Edwards, who was knocked unconscious and injured during the attack, provided live, often chilling testimony of "the war zone" that was the west front of the Capitol, as did documentarian Nick Quested, who was embedded with the Proud Boys. 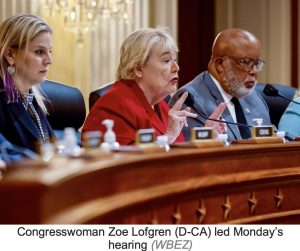 The focus of the second hearing, as laid out by Cheney, was to cover how "Donald Trump and his advisers knew that he had in fact lost the election," but still "engaged in a massive effort to spread false and fraudulent information" that the election was stolen.

The hearing was dramatically delayed by 46 minutes due to the absence of key witness, former Trump Campaign Manager Bill Stepien, whose wife had gone into labor. Stepien's presence was also expected to add to the tension of the hearing as he is currently acting as a political advisor to one of Cheney's primary election opponents.

Committee member Congresswoman Zoe Lofgren (D-CA), who led the day's proceedings, began the hearing with "today we examine the false narrative that the 2020 election was stolen," and how Trump planned to overturn the election by "deceiving millions of Americans with knowingly false claims of election fraud."

Lofgren showed clips of Trump speaking, laying "the groundwork for these false claims well in advance of the election. As early as April 2020, Mr. Trump claimed that the only way he could lose an election would be as a result of fraud...The election fraud claims were false. Mr. Trump's closest advisor knew it. Mr. Trump knew it." 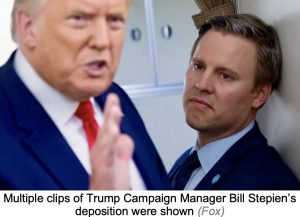 The committee showed a sequence of video testimony from Trump's inner circle who were at the White House election night, and the conversations that took place after Arizona was called for Joe Biden -- a critical turning point in the results.

Testifying in person, former Fox News Digital Political Editor Chris Stirewalt, who first called Arizona for Joe Biden on election night 2020, explained the turn toward Biden in several battleground states. Stirewalt said his team had gone to “pains” to inform viewers that a so-called “red mirage” -- a Republican appearing to lead on election night -- was likely to change after early votes were counted. Historically election day votes, which are counted first, favor the GOP, and mail-in ballots favor Democrats.

“The Trump campaign and the President had made it clear that they were going to try to exploit this anomaly,” Stirewalt said, in order to back up Trump's claim that an illegal "dump," of Democratic votes had been made in several states. Stirewalt was fired from Fox, a longtime media ally of Trump's, in January 2021.

Among the election-night guests at the White House was Trump attorney Rudy Guiliani, who, according to testimony, was intoxicated and encouraging Trump to go out and declare victory. 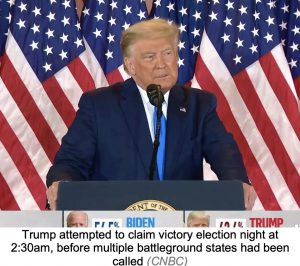 Stepien said that Trump was repeatedly briefed that a declaration of victory was premature at that point, "that votes were still being counted, that it is too early to tell, too early to call the race." Trump, however, "went in a different direction."

In the days and weeks after November 3, 2020 election, Trump's meritless claims became increasingly outlandish. He fired his legal team, who had continued to advise him there were no grounds for election fraud.

US Attorney General Bill Barr, who provided some of the most substantive video testimony, said he had repeatedly told Trump that his claims of fraud were “bullshit” and "bogus." At one point during his deposition, Barr laughed at the absurdity of the claims, which included defense contractors in Italy using satellites to flip votes. 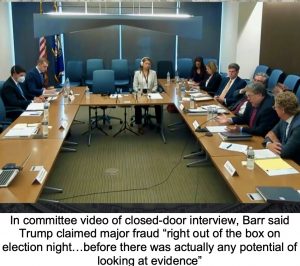 Trump had “become detached from reality...There was never an indication of interest in what the actual facts were,” said Barr, who quit the administration December 23, 2020.

The pressure on the Department of Justice, however, continued. Former Acting Attorney General Jeffrey Rosen, who investigated each claim presented to him, told Trump he was "getting bad information" and that the incidences of fraud had "been debunked."

After Trump attacked him on Twitter, Schmidt and his family received multiple violent death threats.

Conservative attorney Benjamin Ginsberg, introduced as "the most prominent Republican lawyer who's litigated in the election field," testified that "the simple fact is that the Trump campaign did not make its case.”

Ginsberg said he had reviewed the more than 60 lawsuits brought by Trump and his allies, saying that about half of the cases "were dismissed at the procedural stage for a lack of standing...or there wasn't sufficient evidence." Of the remaining, Ginsberg said, "in no instance did a court find that the charges of fraud were real." 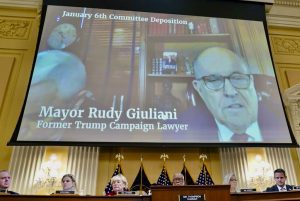 As highlighted by the committee, the opinions issued by both Democratic and Republican-appointed judges in the cases were scathing in their rebuke of the baseless allegations.

One dispute involved pro-Trump attorney John Eastman, who advised Trump and his team on legal strategies to overturn Biden's electoral victory. US District Court Judge David Carter of California rejected Eastman's attempts to block a subpoena from the January 6th Committee to turn over related documents, calling Trump and Eastman's plan to obstruct Congress "a coup in search of a legal theory."

The president's claims in the election lawsuits were so "demonstrably false and misleading" that Trump's lead attorney, Rudy Guiliani, had his license to practice law suspended in New York and DC.

In the final part of the hearing, Lofgren asserted that Trump's use of the "Big Lie" of a stolen election was also a "Big Rip Off" -- used to mislead his supporters into contributing hundreds of millions of dollars to a non-existent "Official Election Defense Fund." 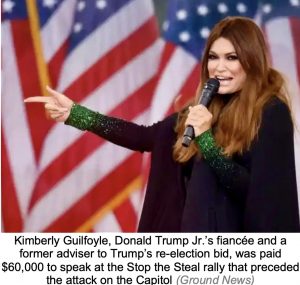 Between Election Day and January 6th, the Trump campaign barraged followers with as many as 25 emails a day claiming a "left-wing mob" was undermining the election, raising $250 million -- nearly $100 million of which was raised in the first week after the election. The emails continued, even as the Capitol was being attacked.

On November 9, 2020, Trump formed a separate "Save America PAC," which was used primarily to donate funds to Trump allies and associates, including $1 million to former Chief of Staff Mark Meadows' charitable foundation.

$1 million also went to the American First Policy Institute, a conservative organization that employed several former Trump administration officials, nearly $205,000 went to the Trump Hotel Collection, and $5 million to Event Strategies, Inc., which organized the Stop The Steal rally the morning of the Capitol attack.

Chair Thompson closed the hearing, introducing a video saying, "Today, we'll end things where we did on Thursday, back on January 6th, hearing words of individuals who wanted to stop the transfer of power. We know they were there because of Donald Trump. Now we hear some of the things they believed."

November 28, 2022 While the rest of the country enjoyed a post-election holiday reprieve, there was no rest for the weary in Georgia, where early voting began Saturday in the US Senate runoff...