The country's defense, military and diplomatic corp are speaking out in an unprecedented show of rebuke of President Donald Trump's handling of the civil unrest following the tragic death of George Floyd, and his threats to unleash our country's military on its fellow citizens. 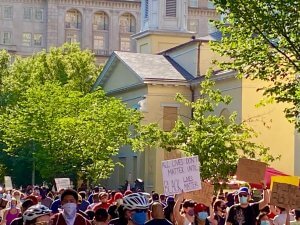 The final tipping point for many came June 1st, when Trump commanded law enforcement, including members of the National Guard and federal officers, to clear a path through peaceful protestors in Lafayette Park so that he could stage a photo-opportunity in front of a damaged St. John's Episcopal Church.

To disperse the lawful crowd, which included members of the media and clergy, officers used tear gas, flash grenades and rubber bullets -- all so that Trump could get a picture holding up a Bible.

The same day the president threatened to invoke the Insurrection Act of 1807 to deploy federal troops to quell the protests nationwide. The act was last invoked in 1992 to control the Los Angeles riots after the acquittal of four white police officers in the beating of Rodney King, a black man.

Trump's actions and words set off a series of extraordinary public critiques by current and former defense and military leaders, and sparked a national debate about the role of the military in civil society. 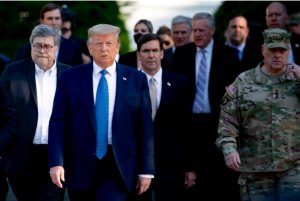 The outrage included criticism of Defense Secretary Mark Esper and Chairman of the Joint Chiefs of Staff Mark Milley, both of whom accompanied Trump for political photo-op.

Esper defended his presence saying he had "no idea" protestors had been forcefully cleared and that he "thought I was going to do two things: to see some damage and to talk to the troops."

Milley, America's top general, took his apology much further, releasing a recorded video saying, "I should not have been there. My presence in that moment and in that environment created a perception of the military involved in domestic politics. As a commissioned uniformed officer, it was a mistake." Milley also said that he was "outraged by the senseless and brutal killing of George Floyd," and the "centuries of injustice toward African Americans."

Esper's predecessor, former Trump Defense Secretary James Mattis issued a June 3rd repudiation of Trump, calling him "the first president in my lifetime who does not try to unite the American people -- -does not even pretend to try. Instead he tries to divide us."

That day General John Allen, the former commander of American forces in Afghanistan and former special presidential envoy for the Global Coalition to Counter ISIS, penned an op-ed for Foreign Policy, saying Trump's dispersal of protesters in front of St. John's "may well signal the beginning of the end of the American experiment." 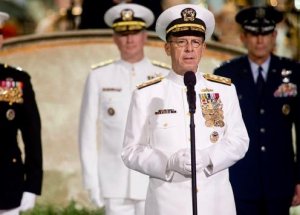 Fmr Joint Chiefs Chair Adm Mike Mullen, was "sickened" by Trump's "disdain for the rights of peaceful protest in this country (which) gave succor to the leaders of other countries who take comfort in our domestic strife, and risked further politicizing the men and women of our armed forces." (C.McNeeley)

The retired four-star Marine general wrote, "Donald Trump isn't religious, has no need of religion, and doesn't care about the devout, except insofar as they serve his political needs. The President failed to project any of the higher emotions or leadership desperately needed in every quarter of this nation during this dire moment."

On Friday, June 5th, a letter titled "The Strength of America's Apolitical Military,' now endorsed by 612 former senior U.S. diplomats and military leaders, denounced Trump's threats to implement the Insurrection Act. "Many of us served across the globe, including in war zones, diplomats and military officers working side by side to advance American interests and values. ... There is no role for the U.S. military in dealing with American citizens exercising their constitutional right to free speech, however uncomfortable that speech may be for some."

Hours later, in an op-ed in The Washington Post, 89 former defense officials condemned Trump as "betraying (his) oath by threatening to order members of the U.S. military to violate the rights of their fellow Americans." 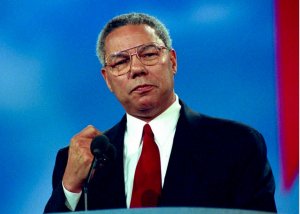 Powell: "I cannot in any way support President Trump"

On Sunday, June 7th, former Secretary of State Colin Powell said Trump's behavior " is dangerous for our democracy, it is dangerous for our country. And I think what we're seeing now, the most massive protest movement I have ever seen in my life, I think suggests the country is getting wise to this and we're not going to put up with it any more."

A separate question is how the words of the defense leaders will affect the votes of the military rank and file, 60% of whom, in 2016, cast their ballots for Trump.

In addition, approximately 40% of active-duty service people and reserves are people of color, whose opinions may be more swayed by recent events.

There is little current data available to measure the mood of the military electorate, with the last known survey, taken by the Military Times last fall, showing 50% of active-service military held an unfavorable view of Trump, compared to only 37% when he was elected. Only a third of Officers indicated approval of the president at the time.

Trumps actions do, however, appear to be affecting the mood of the general electorate. 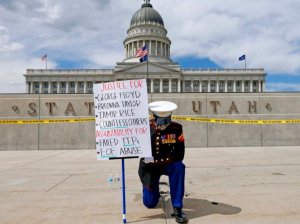 In a May 28-June 4, 2020 Gallup poll, conducted amid nationwide protests over racial injustice and the May 25th death of George Floyd, found that 39% of Americans approve of Trump's job performance, while 57% disapprove.

The new numbers represent a double-digit tumble from a Gallup poll just two weeks ago in which his approval rating stood at 49%.