Robert F. Kennedy's vision and message resonate today as much as they did 49 years ago when he was tragically struck down by an assassin's bullet. He was the inspiration of a new generation, and the hope of a country, and we can learn much from his words and example. 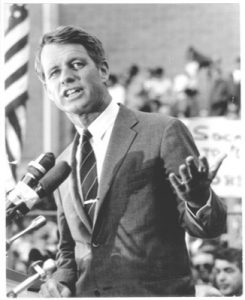 Article Featured today in The Tennessean and The Commerical Appeal (Gannett)

"And now it's on to Chicago, and let's win there," Senator Robert F. Kennedy triumphantly declared during his speech after a decisive victory in the California Democratic primary on June 5, 1968.

It had become clear that Kennedy would be the Democratic nominee for the 1968 presidential election. He had inspired a generation of young people to get involved in politics and galvanized a Democratic Party still reeling from the loss of his brother President John F. Kennedy five years earlier.

But as Senator Kennedy walked out of the Ambassador Hotel ballroom that night, shots rang out.

Robert Kennedy's life was tragically lost and a beacon of hope for a generation of young Americans was extinguished. Our nation would be forever changed.

The convention damaged the trust the Democratic Party built with the American people. Richard Nixon ran a divisive campaign pitting the law-and-order "silent majority" against the riot-plagued Democrats scrambling for unity amidst crisis, and Nixon won the 1968 presidential election. 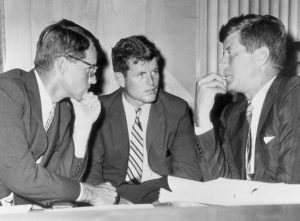 Richard Nixon's presidency resulted in more than 30,000 additional American soldiers killed in Vietnam. His war on drugs and the Southern Strategy left inner cities, our young people and the African-American community ravaged for generations. The Watergate scandal, which led to Nixon's resignation, shook the country to its core.

President Kennedy's legacy and Robert Kennedy's vision of a more progressive America was shattered on that June 5th night in Los Angeles. At the end of the summer in 1968, Edward Kennedy said in reference to his brothers, "I shall try to carry forward that special commitment to justice, excellence and courage that distinguished their lives."

Rather than a Southern Strategy rooted in racism, President Robert Kennedy would have expanded upon the Civil Rights Act of 1964 and Voting Rights Act of 1965. He built a reputation as a strong champion of civil rights and as a fighter for low-income Americans.

Upon learning of Dr. Martin Luther King, Jr.'s assassination, Robert Kennedy informed a predominantly African American audience in Indianapolis of the tragic news. He spoke extemporaneously, reflecting on experiencing assassination in his family. He preached unity and rising above anger and vengeance.

Robert Kennedy also understood the importance of America's investment in culture, education and science to provide people with the opportunity to achieve the American Dream. In contrast, Nixon played to America's fears and invested in the military industrial complex, which President Eisenhower warned us about, and a harsh, punitive criminal justice system.

Finally, Robert Kennedy would have likely ended the war in Vietnam years earlier, saving thousands of lives. Nixon, on the other hand, continued the war for political gain. Kennedy also supported his brother's policies of nuclear disarmament, diplomacy and restraint.

America has struggled to recover from the Kennedy assassinations and the resulting Nixon years. The deep racial divides in this country still plague us. The election of Barack Obama rekindled the progressive momentum that John and Robert Kennedy championed. 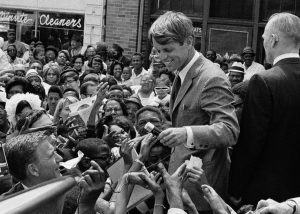 On the anniversary of the assassination of Senator Kennedy, the modern progressive movement should reflect upon the Kennedy legacy of justice, excellence and courage as we fight another president who threatens our values.

Sometimes we see the elections of presidents as a pendulum that swings back and forth between the parties, ultimately balancing the different viewpoints of voters.

But elections are more like ripples in the water with effects that spread on into the future, leaving us wondering "What if?"

We cannot change what happened but we should, as we remember Robert Kennedy, continue to be the ripples of hope that he thought we could be.

As Robert Kennedy famously said, quoting George Bernard Shaw, "There are those that look at things the way they are, and ask why? I dream of things that never were, and ask why not?"