While some may just be awakening to the world of advocacy and campaigns, there are those who have been fighting in the shadows of history for years to make it possible for current and future generations to have a voice.

Heather Booth is one of those people."

One of the nation's most influential organizers for progressive causes.  Inside almost every liberal drive over the past decades - for fair pay, equal justice, abortion rights, workers' rights, voter rights, civil rights, immigration rights, child care - you will find Booth."  -- Huffington Post

From her early days as a student organizer at the University of Chicago and fighting for voting rights during Freedom Summer, to her founding of the Midwest Academy, the nation's largest training school for community organizers, to the hundreds of progressive issues, candidate campaigns and organizations she has led -- she has been a true leader in the avancement of human rights and an inspiration for thousands of young activists."

" always she's advancing the credo she learned as a child: 'You must not only treat people with dignity and respect, but you must shoulder your own responsibility to help build a society that reflects those values.' "

Thanks to award-winning independent filmaker Lilly Rivlin, all have the opportunity to learn and be inspired by Heather's work. Rivlin's movie Heather Booth: Changing the World, is the third in a trilogy about women activists and their art, and is showing in DC and other cities. 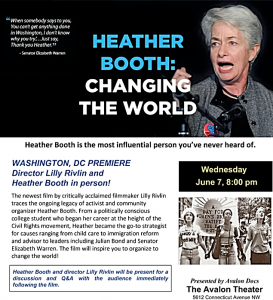 Presented in cooperation with DC LaborFest and Women in Film & Video. We hope you can join us!

Learn More About: HeatherBoothTheFilm
Follow On: Facebook
Follow the Dailys and the DemList for updates!
Check Out: DemDaily: It was the Summer of 1964 .. about Freedom Summer