The 2022 primary season kicked off in full force Tuesday with contests in Ohio and Indiana. The month of primaries ahead are expected to provide a preview of where the parties may be heading in November's midterm elections.

INDIANA
US Senate
Incumbent GOP Senator Todd Young, who was unopposed in the primary, is running for reelection.

Young, who publicly stated that former President Donald Trump bore responsibility for January 6th, is also only one of four incumbent Republican Senators who does not have Trump's endorsement.

Young is facing a challenge from Democrat Tom McDermott Jr. an attorney and the longest-serving Mayor of Hammond, Indiana, first elected in 2003 after unseating the incumbent Republican.

McDermott ran for Congress in 2020 to succeed retiring eight-term Democratic Congressman Pete Visclosky in Northwest Indiana's First District. McDermott came in a close second in a 14-candidate primary field to now-Congressman Frank Mrvan, who had the endorsement of Visclosky.

The Politics of Indiana
Indiana has long been considered a ruby-red state, having supported a Democrat for president just five times since 1900. The last was Barack Obama in 2008, who carried the state by 1.03%. Donald Trump won the state by 16 points in 2020. 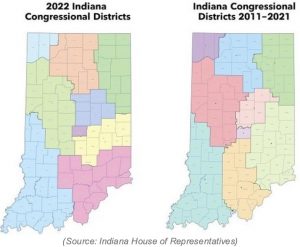 Regardless, the Hoosier State is not without history of electing Democrats statewide. Indiana's junior US Senator is Republican Mike Braun, who unseated incumbent Democratic Senator Joe Donnelly in 2018, 51%-45%.

The current governor of Indiana is Republican Eric Holcomb, but half of Indiana's governors over the last century were Democrats.

Republicans have held supermajorities in both state chambers since the 2012 elections, but Democratic have strongholds in Gary and Indianapolis. 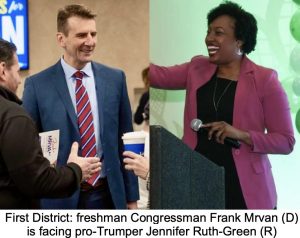 In the GOP primary contest to take on First District freshman Congressman Frank Mrvan (D), Jennifer Ruth-Green defeated six other contenders to emerge as the nominee. Green, a Black U.S. Air Force veteran who has promised to "advance Trump’s America First policies," won 47.1% of the vote.

Green has cited pushing for "strong families" as one of her top priorities, which includes advocating for anti-abortion policies and keeping transgender girls out of sports.

In the Sixth Congressional District, Republican Congressman Greg Pence easily fended off a primary challenge, garnering 77.6% of the vote. The two-term incumbent, who was reelected to the east-central Indiana seat in 2020 with 68.6% of the vote, is the brother of former Vice President Mike Pence. He will face educator and small business owner Cynthia Wirth, who won the Democratic nomination with 73.1%.

Indiana's south central Ninth Congressional District is open, following the January 2022 announcement by three-term Republican Congressman Trey Hollingsworth that he would not seek reelection. Hollingsworth, who was elected in 2016 to succeed now-US Senator Todd Young was reelected in 2020 with 61.8% of the vote.

Houchin will go head-to-head against school teacher and union leader Matthew Fyfe, who defeated two primary challengers to win the Democratic nomination with 56.8%.

Convention 101: The first of regular updates on the 2016 Presidential Convention.

November 28, 2018 Now three weeks after the 2018 elections, the last of the major midterm races was decided last night, bringing the balance of power in the upper chamber to 53 Republicans and 47...