While the nation still reels from the violent assault on the Capitol and our democracy Wednesday, members of Congress are debating the final chapter of Donald Trump's precidency and the penalty for inciting the insurrection that ended up with the death of five people and dozens more injured.

Almost one year after President Trump was impeached for "High Crimes and Misdemeanors," his treasonous actions have spurred yet another impeachment battle and constitutional showdown.

In a long-planned and heavily promoted rally held in opposition to the January 6, 2021 congressional affirmation of the electoral college vote, Trump incited followers to march on the US Capitol. 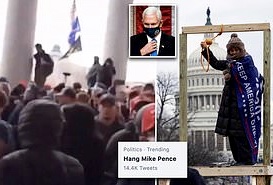 As of Saturday at 1:30pm, 14,400 Twitter users had used the phrase "Hang Mike Pence" re Pence's refusal to block the electoral college confirmation of Biden. Twitter has blocked the phrase

The ensuing chaos and riots that ravaged the halls of Congress, prompted national and international outrage over the President's actions, with immediate calls for his resignation.

"The president lit the fuse which exploded on Wednesday at the Capitol and every day he remains in office is a real and present danger to the country," said House Intelligence Committee Chair Adam Schiff (D-WA).

The bipartisan call for removal of Trump from office has been echoed in the resignations of several of his own Cabinet members, and public condemnation by former administration officials, military and public leaders.

With only nine days left in his term, Trump faces one of four fates.

Resignation
If Trump were to resign before the end of his term January 20th, Vice President Mike Pence would ascend briefly to the presidency, opening up the option for Pence to pardon Trump. All indications are that Trump has no intention of resigning.

The first, authored by Congressman Jamie Raskin (D-MD), a constitutional scholar, called on Vice President Pence to "convene and mobilize" to declare Trump unfit to carry out his duties, and vote to remove the President from office under Article 4 of the 25th Amendment. 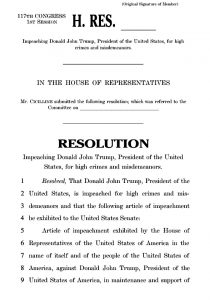 The measure, having failed to receive unanimous consent amongst the split Congress, will now go to the House floor for a vote on Tuesday.
At that point, the resolution -- essentially an ultimatum by House Speaker Nancy Pelosi -- gives Pence 24 hours to respond.

If the Vice President is unwilling to initiate such action, congressional leaders are preparing to move forward with articles of impeachment against the President.

House Impeachment
The second resolution was an article of impeachment against the President, charging him with 'incitement of insurrection' for his role in the takeover of the US Capitol last week by a violent pro-Trump mob.

The Constitution allows House lawmakers to introduce a motion to impeach, or a privileged resolution for impeachment, and proceed directly to a debate and floor vote. 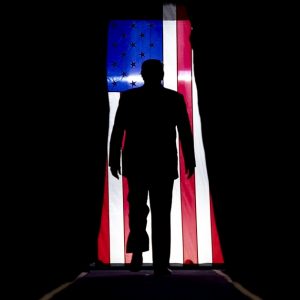 The memo said that without a unanimous consent agreement from all 100 senators to bring the chamber back in session in the next 10 days, the soonest it could receive articles of impeachment from the House would be on January 19th - the eve of President-elect Joe Biden's inauguration.

However, that does not preclude the Senate from conducting a trial and possible conviction after the new President and Senate is sworn in. House Majority Whip James Clyburn has floated the suggestion that a Senate trial that could take place after Trump leaves office and Biden gets through the first 100 days of his administration.

A two-thirds vote is required to convict Trump. If the Senate were to vote to convict, they could then proceed to a simple majority vote on whether to bar him from holding future federal office.

A vote on impeachment, the first step toward that process, is expected Wednesday.

Although President Trump has been banned for life from Twitter "due to the risk of further incitement of violence," that has not kept him from communicating to his supporters.

September 18, 2020 The person who may be the nation’s first Second Gentleman is a mystery to most Americans, as someone who has largely stayed in the background of his wife Kamala...