Inaugural week, which kicked off Saturday and is themed "America United," includes an expanding list of events celebrating the 59th Presidential Inauguration - just two days away!

Sunday night's "We The People Concert," hosted by Keegan-Michael Key and Debra Messing, expanded on the list of celebs and performers with AJR, Connie Britton, Cher, Fall Out Boy, Ben Harper, Carole King, James Taylor, and will.i.am. DJ Cassidy closed it out with a rocking montage of inspirational oldies. 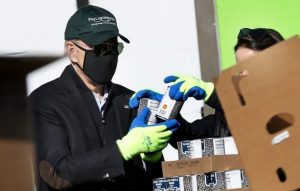 In partnership with organizations across the country, events will focus on COVID-19 relief and address challenges that have been exacerbated by the pandemic, such as poverty, hunger, racial injustice, homelessness and mental health.

Field of Flags
6:00pm EST
An extensive public art display on the National Mall will include approximately 191,500 US flags representing every state and territory, and 56 pillars of light. The Field of Flags will represent the American people who are unable to travel to Washington, DC. 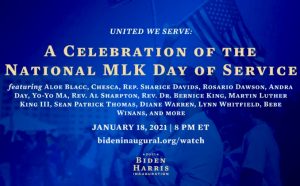 The display will be lit up Monday night, taking about 46 seconds to commemorate Biden's distinction as the 46th president of the United States. 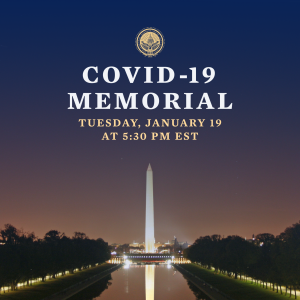 Discovery, Inc. and Discovery Education will provide a virtual learning experience to educators, students, and families. Dr. Jill Biden will address students with a behind-the-scenes look at the inauguration with a series of interviews with experts and historians. Streamed on discoveryeducation.com

National COVID Memorial
5:30pm EST
The memorial will honor the lives lost to COVID-19. In the nation's capital, the ceremony will feature a lighting around the Lincoln Memorial Reflecting Pool. Citizens in cities and towns across the country are invited to join Washington, D.C. in illuminating buildings, ringing church bells and lighting your own candles in a national moment of unity and remembrance." Streamed on bideninaugural.org/watch

WEDNESDAY, JANUARY 20th
Our White House: An Inaugural Celebration for Young Americans
10:00am-12:30pm EST
Award winning entertainer Keke Palmer will host the livestream for young Americans, including a special message from Dr. Jill Biden, commentary from historians Doris Kearns Goodwin and Erica Armstrong Dunbar, and a segment on presidential pets produced by Nickelodeon. Trivia questions, including some asked by Doug Emhoff, and segments produced by the Library of Congress are among the special features.
Streamed at BidenInaugural.org/youth 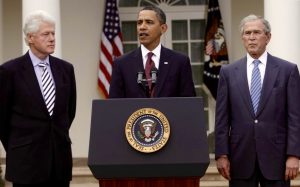 Swearing in Ceremonies
11:30am EST: West Front of the US Capitol
Times TBD

Pass in Review
1:00pm EST: East Front of the Capitol
In the traditional military ceremony, the President, First Lady, Vice President and Second Gentleman, hosted by the Commander of Joint Task Force-National Capital Region, will review the readiness of the troops, represented by every branch of the military. 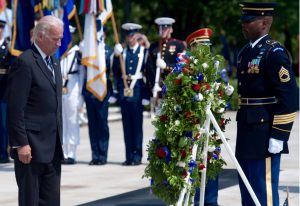 Wreath Laying Ceremony
1:45pm EST: Tomb of the Unknown Soldier
Arlington National Cemetery
The wreath-laying ceremony at the Tomb of the Unknown Soldier will provide the American people with a show of bipartisan unity. The event will honor the nation's brave servicemen and women and remember those who have made the ultimate sacrifice for our nation.

Presidential Escort
2:30pm EST: 15th Street, NW to the White House
The new President, Vice President and their families will be escorted to the White House by the US Army Band, a Joint Service Honor Guard, and the Commander-in-Chief's Guard and Fife and Drum Corps from the 3rd U.S. Infantry "The Old Guard." 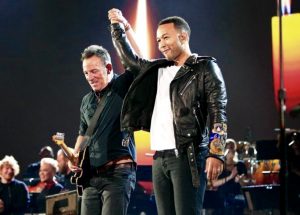 The Boss and John Legend will perform (yahoo)

Virtual Parade Across America
3:00pm-5:00pm EST
The parade will celebrate America's heroes, highlight Americans from all walks of life in different states and regions, and reflect on the diversity, heritage, and resilience of the country as we begin a new American era. Streamed on BidenInaugural.org/watch

The program will celebrate and highlight American heroes who are helping their fellow Americans through the pandemic crisis, including frontline workers, health care workers, teachers, citizens giving back, and those who are breaking barriers. 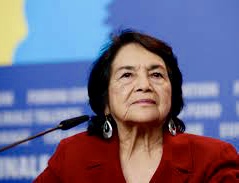 The program will be carried live on major networks and will be streamed on BidenInaugural.org/watch and other platforms.