Washington, DC and the world are anxiously awaiting the inauguration of Joseph Biden and Kamala Harris, less than 24 hours from now!

In the interim, the nation's capitol, under the most extreme security lockdown in modern history, sits on the edge of anticipation and excitement, awaiting the close to the dictatorial reign and still ongoing consequences of Donald Trump's presidency.

The Outgoing
Inside the Capitol fortress, as the US Senate held confirmation hearings for five of Biden's Cabinet nominees, Republican Senate Majority Leader Mitch McConnell (KY) took the opportunity to condemn the cause of the national security crisis that has permeated every US state.

Referring to the January 6th seige on the Capitol, McConnell said President Donald Trump "provoked" the mob's violent attempt to subvert the transition of power, one that ended in the death of five people.

His remarks came as the Senate awaits formal transmission of the Article of Impeachment passed against Trump last week by the US House of Representatives, for with "willful incitement of insurrection." 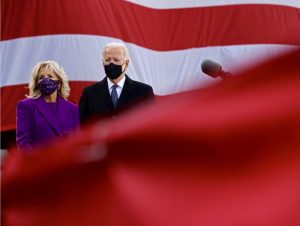 Joe Biden and Dr. Jill Biden at ceremony before their departure to DC (Chip Somodevilla)

Formal receipt of the Article from the House, expected this week, will immediately trigger the start of the Senate's Impeachment trial proceedings against the soon-to-be former President. It is still unknown whether McConnell will support conviction, which could also lead to a ban on Trump holding future federal office.

It is also unclear whether McConnell, under the circumstances, will be among the guests at President Trump's departure ceremony, now scheduled to take place at 8:00am Wednesday from Andrews Airforce Base.

The Incoming
In contrast, in an emotional farewell ceremony this afternoon before departing Delaware for Washington, President-elect Biden professed thanks to his adopted home state.

Biden had hoped to travel to the capitol by train, as he and Barack Obama did before their 2009 inauguration, and as he did for decades as a US senator, but was unable to do so because of security concerns. 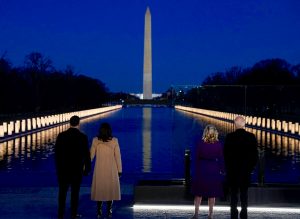 Milestone and Memory
Amidst the turmoil and trepidation leading up to the final hours of the Trump administration, the US surpassed 400,000 deaths due to COVID-19. At 5:30pm today, as a part of the formal inauguration ceremonies, President-elect Biden, Vice President-elect Kamala Harris and their spouses honored Americans who have lost their lives to the coronavirus pandemic.

In a simple ceremony, before he signaled the lighting of the reflecting pool in front of the Lincoln Memorial, Biden said, "between sundown and dusk, let us shine the lights on the darkness along the sacred pool of reflection and remember all we lost."

Cities across the US lit up buildings, churches and their own homes with candles in joint tribute. It was a sobering, but beautiful and poignant moment for the nation's citizens to share their grief and begin the healing ahead of us.

The Celebration
As the country moves forward, the Presidential Inaugural Committee (PIC) is offering no shortage of events celebrating the 59th Inauguration. The Capitol Platform, in preparation for ceremonies (Boston Globe)

The pre-inaugural festivities kicked off Saturday with a celebration of "America's Gamechangers" and Sunday's "We The People" concert, followed by Monday's "United We Serve" National Martin Luther King Day of Service and evening tribute to the spirit and commitment of the late civil rights leader.

DemList will send out our updated Inauguration Day LineUp tomorrow morning as we head into the historic day.

Securing The Capitol
In the interim, the FBI has warned of armed pro-Trump protests being planned Wednesday in all 50 state capitals and the US Capitol, causing an unprecedented security operation nationwide.