On Tuesday, the US House of Representatives passed H.R.4, the John Lewis Voting Rights Advancement Act, named after the late civil rights icon and Georgia Congressman.

The bill, passed along party lines, would restore and strengthen parts of the 1965 Voting Rights Act, parts of which were struck down by the US Supreme Court in 2013 in Shelby County v. Holder, and in July of this year in Brnovich v. Democratic National Committee.

The bill, however, faces stiff opposition from the GOP in the evenly divided US Senate, where at least 10 Republicans would need to vote for the Act to break the filibuster and achieve passage. 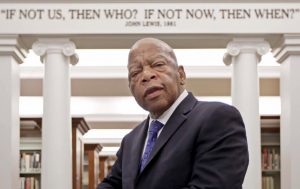 Republican Minority Leader Mitch McConnell (KY) has deemed it "unnecessary" as voting rights are under "no threat," and that the Act would give the Justice Department too much power over states.

In truth, we are facing what President Joseph Biden has called, "the most significant test of our democracy since the Civil War," as a wave of over 400 voter suppression measures introduced by Republicans in 49 states this year alone.

The only alternative is to turn to Congress for legislative relief, which is why, this weekend, we must march.

This Saturday, on the 58th anniversary of Dr. Martin Luther King's historic March on Washington, voters and activists will descend on Washington, DC and other major cities to shine a light on what is happening in state legislatures nationwide.

Their mission, our mission, is to demand that elected officials protect democracy through the passage of comprehensive federal legislation, including the John Lewis Voting Rights Advancement Act and the For The People Act, which passed the US House in March but has been blocked in the US Senate. 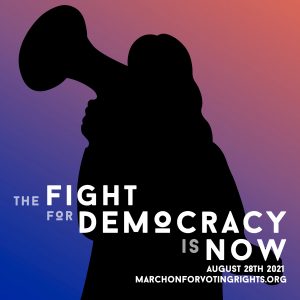 March On For Voting Rights will take place in Washington, DC, Atlanta, Miami, Houston, Phoenix and in 75 locations across the country.
Find a March in your City or Town

Click here for all you need to know about the DC March!

Actions
Contact Your US Senator and demand they take action on For The People Act, the John Lewis Voting Rights Advancement Act, and the Washington, DC Admission Act.