It was not until July 26, 1990 that the first comprehensive civil rights act for people with disabilities, theAmericans With Disabilities Act (ADA) was passed into law.

Today there are more than 61 million Americans who live with disabilities, representing nearly one-in-four people in this country. 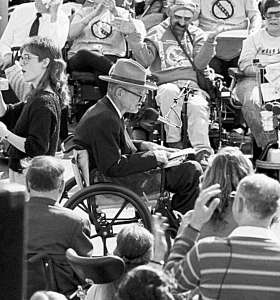 History
"Three decades ago, protesters with disabilities converged on the nation's capital to fight for one of the most important civil rights laws in our history - the Americans with Disabilities Act ... these brave protesters ascended the 83 steps of the United States Capitol - some even crawling to get to the top - so they could send a message to their representatives: no American should ever face discrimination based on their disability status." -- former Congressman Tony Coelho (D-CA), ADA Sponsor, and Chair, DNC Disability Council

The historic legislation was introduced by Congressman Tony Coelho in the House and Senator Tom Harkin in the Senate, and signed into law by President George H.W. Bush on July 26, 1990.

The ADA was revised in 2008 under the ADA Amendments Act (ADAAA) to expand the definition of disabled.

In October, 2019, the Supreme Court declined to resolve a circuit split as to whether websites are covered by the ADA. The Court turned down an appeal from Domino's Pizza and let stand a US Ninth Circuit Court of Appeals ruling which held that the Americans With Disabilities Act protects access not to just brick-and-mortar public accommodations, but also to the websites and apps of those businesses. 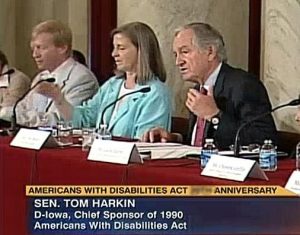 Trump's ADA
Trump and his administration's disregard for the disabled is well documented.

In a November, 2015 campaign speech, President Trump infamously mocked a disabled reporter who has arthrogryposis, a condition that limits joint function.

The American Healthcare Act (AHCA), the Republican's 2017 failed attempt to replace Obamacare, would have made significant cuts to services for the disabled under Medicaid. 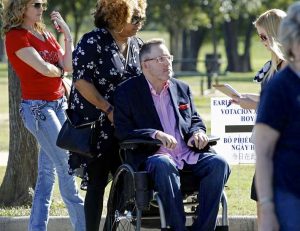 In 2018, the then Republican-controlled House passed the ADA Education and Reform Act (HR 620), which removed corporate incentives for adhering to ADA guidelines, and created barriers for victims seeking legal action against offending companies. The bill, however, failed in the Senate, thanks to the the efforts of Senator Tammy Duckworth (D-IL), a wheelchair-bound Iraq War veteran and frequent voice for the disabled.

In 2019, Trump tried to defund the Special Olympics, but after severe pushback from supporters of the popular program, he abruptly reversed himself.

This year, the Trump administration proposed eliminating funding under the Autism CARES Act for training health professionals and developing evidence-based services. The administration has also proposed sweeping changes to the Social Security Disability Insurance program that would redefine the work week and lead to fewer disability benefit awards. 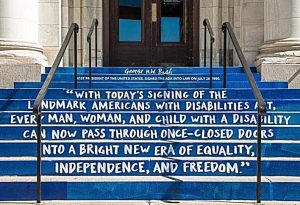 It is ultimately up to the voters to protect the civil and human rights of all people, including those with disabilities.  Let your voice be heard. Vote!

Follow the DemList Convention Calendar for all updates on the August 17th-20, 2020 convention. Submit your events for free promotion.

October 25, 2022 With just two weeks until the 2022 midterm elections, and with early voting underway in 35 states, candidates are hoping to sway undecided voters with their final debate...

August 29, 2019 Another incumbent has added his name to the list of Members exiting Congress, bringing to a total five in the US Senate and fourteen in the US House. Georgia Republican Senator...