Over nine hours yesterday, the President's defense team presented their arguments in the sixth day of the impeachment trial of President Donald J. Trump. 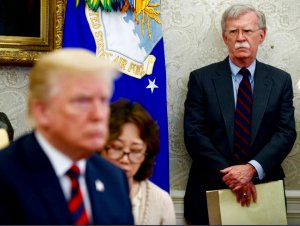 Their arguments, however, came after the bombshell New York Times release Sunday of an unpublished draft of former National Security Advisor John Bolton's book "The Room Where It Happened."

In the manuscript, Bolton said Trump personally told him "he wanted to continue freezing $391 million in security assistance to Ukraine until officials there helped with investigations into Democrats including the Bidens."

Throughout the trial President's lawyers have contended that there was no direct, or first-hand evidence of the quid pro quo, but the revelations in Bolton's book provide just that -- increasing the chances that he and other witnesses will be called to testify.

Democrats need four Republicans to cross over and support a vote to subpoena witnesses and additional evidence, expected to take place at the end of the week after the close of the defense arguments and a question and answer period by both sides.

On Monday, GOP Senator Mitt Romney (UT) told reporters, "I think it's increasingly likely that other Republicans will join those of us who think we should hear from John Bolton," and Susan Collins (R-ME) tweeted, "reports about John Bolton's book strengthen the case for witnesses and have prompted a number of conversations among my colleagues."

Romney and Collins, along with Senators Lisa Murkowski (AK) and Lamar Alexander (TN) and Susan Collins (ME) are the most likely defectors, but Independent Senator Angus King (ME) said Monday that he believes the number may go as high as ten. 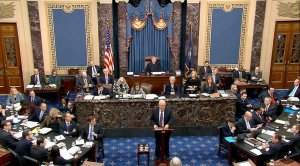 Trump's defense team, however, ignored the development in their eight-hour presentation yesterday, continuing to argue that House managers had produced "not a single witness" with firsthand knowledge of a quid pro quo.

One-by-one, the lawyers attempted to take apart the impeachment articles against the President of Abuse of Power and Obstruction of Congress, from claims of unauthorized impeachment hearings and "mischaracterization and errors" by Democrats, to complete denial of the events of the Ukraine scandal.

Considerable time was spent on accusations of corruption against former Vice President Joe Biden, and his son Hunter Biden's lucrative role as a board member of Ukrainian energy company Burisma. Although the Bidens have been cleared of any wrongdoing, former Republican Attorney General of Florida Pam Bondi, speaking on the Senate floor, said it, "looks nepotistic at best, nefarious at worst." 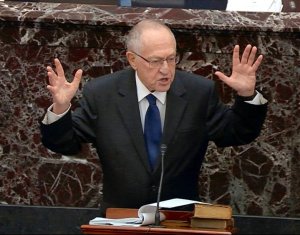 The Republican's intention to smear Biden in advance of next week's Iowa caucus was naively confirmed by freshman GOP Senator Joni Ernst (IA) last night when she told reporters that she was "really interested to see how this discussion today informs and influences the Iowa caucus voters, those Democratic caucus goers. Will they be supporting VP Biden at this point?"

Among the most dramatic moments came at the end, with the presentation by former Harvard Law School professor and famed defense attorney Alan Dershowitz, whose clients included financier Jeffrey Epstein.

Dershowitz argued that the charges leveled against Trump by the House didn't reach the level of impeachment and removal, "Purely non-criminal conduct, including abuse of power and obstruction of Congress, are outside the range of impeachment offenses."

His testimony directly contradicts that of other legal scholars, as well as his own 1998 comments during the Clinton impeachment hearings in which he said, "If you have somebody who completely corrupts the office of president, and who abuses trust, and who poses great danger to our liberty, you don't need a technical crime."

A defiant President Trump has broken his own record, tweeting over 100 times a day since the trial began, including a threat to House Manager Adam Schiff, saying "he has not paid the price, yet, for what he has done to our Country!"

Next Up
The defense continues today, Tuesday, January 28th, at 1:00pm ET.

November 7, 2022 The outcome of tomorrow’s elections will come down to boots on the ground and the scramble to make sure every vote is guaranteed, counted and protected. To help connect and...