The long-awaited formal impeachment inquiry into President Donald Trump was not delayed because of a lack of evidence or allegations. Instead, it was because of the capable leadership of House Speaker Nancy Pelosi, whose resistance could be attributed, in part to public opinion.

Despite a continuous stream of constitutional and criminal wrongdoings by the President that began with the day he took office, the voting public has had little appetite for the process.

This is not to say that the public does not believe Trump is innocent, or that they approve of his job performance.

The key shift, however, is in those who are now willing to consider advancing impeachment. 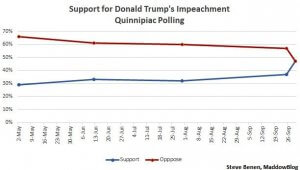 At least seven polls released since Pelosi's September 24th announcement show a decided shift in the public's opinion on impeachment.

In a Quinnipiac University poll released on September 25th, only 37% of voters said that the president should be impeached and removed from office.

In a subsequent Quinnipiac poll released September 30th (conducted September 27-29), the divide has closed 20 points, with 47% for impeachment to 47% against.

Most significantly, polling over the last week shows a shift in white women, and white college-educated voters - who helped propel Trump to office in 2016. 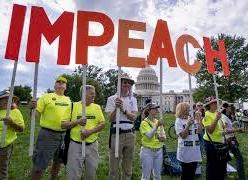 Support is, not surprisingly, divided among party loyalists. According to a Politico/Morning Consult poll released yesterday, eight-in-10 Democrats support impeachment proceedings, while only 9% of all Republicans are supportive.

Independents, however, are warming up to impeachment, with 43% supporting to 39% in opposition. Most polling shows a shift of 6% to 10% among Independents.

The Politico/Morning Consult poll revealed even more promise: 62% of voters said Trump "could do something that would cause me to support impeaching him and removing him from office."

Whether by removal of Congress or by the people in November of 2020, the nation appears, at last, ready to address the fate of Donald Trump.

The Cabinet – Nine of the 15 Cabinet or Executive Departments heads have now been confirmed, as well as five of the seven “Cabinet-level” positions.

January 23, 2019 The new conservative majority on the US Supreme Court is weighing in on some of the most important issues of our time, and yesterday’s 5-4 ruling in favor of the Trump...

September 6, 2018 It is that time.  With 60 days until the November midterm elections, these are the most targeted, or vulnerable, Republican seats in the US House of Representatives — 63 in...