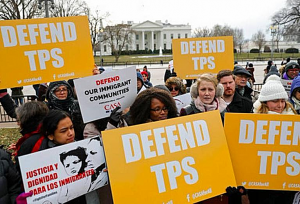 President Trump met with Republican and Democratic Members of Congress at the White House today to discuss, once again, a "deal" on comprehensive immigration reform.

The meeting follows Monday's announcement by the Department of Homeland Security (DHS) that yet another group of immigrants in the US will lose their protected status and be deported from our country.

The move is part of the administration's larger goal of significantly curtailing the use of the Temporary Protected Status (TPS), an immigration policy enacted into law in 1990.

According to DHS, the repeated extensions by previous administrations of the two-year protections have abused the "temporary" provision of the law. 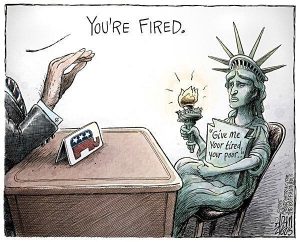 Monday's announcement targets Salvadorans who fled to the United States following a series of devastating earthquakes more than 15 years ago. The new policy would affect an anticipated 200,000 immigrants -- who have until September 9, 2019 to either find a different way to stay in the US or prepare to leave.

Officials, who cited the resolution of the original issue as the reason for the decision, dismissed questions about the poor economic conditions and extreme violence that persist in El Salvador.

The Trump Administration had previously announced the scheduled rescension of protections for Nicaraguans, Haitians, Hondurans, Sudanese and South Sudanese, as well as all those who fall under DACA, or the Deferred Action for Childhood Arrivals.

Immigration and protection of the DACA Dreamers has been a stalling point in agreeing on a federal spending bill before the January 19th government shutdown deadline. Trump, who on Friday sent an $18 billion US taxpayer-funded proposal for building his infamous US-Mexico boarder "Wall" to Congress, said today he would leave it up to lawmakers to resolve the final details.

As with past meetings, Congressional members came away with different interpretations, but the talks appeared to conclude with an agreement to negotiate on four key elements of immigration reform:  Border Security, Chain (Family) Migration, the US VISA Lottery and DACA. 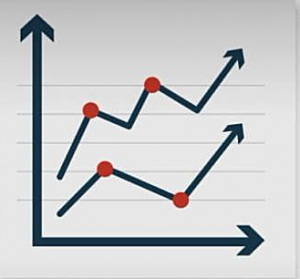 The greatest hope for saving DACA and other condemned immigrant constituencies from the Trump administration lies with the voters themselves.

A December 14-17, 2017 CNN poll conducted by SSRS shows that Americans of both parties back efforts to keep Dreamers in the US by a 83-13% margin.

September 30th, 2021 The US Senate passed a continuing resolution, or stopgap measure, this afternoon to keep the government funded and open, after reaching a bipartisan deal Wednesday night. The...