Yesterday's Illinois primary yielded encouraging results for an energized Democratic party that turned out three times the number of statewide primary voters than 2014, compared with a 15+% drop in Republican primary voters.

In the traditionally "blue" state, which has voted Democratic in the past six presidential elections and delivered a 55.2% to 38.4% victory for Hillary Clinton over Donald Trump in 2016, Dems are hoping to reclaim the Governor's mansion in November.

Governor's Race
In Tuesday's Democratic primary, billionaire venture capitalist J.B. Pritzker, and member of one of America's wealthiest families, emerged the winner from a field of six candidates.  With 45.2% of the vote, Pritzker bested his two closest competitors, progressive state Senator Daniel Biss (26.6%) and developer Chris Kennedy (24.3%), the son of the late Robert F. Kennedy. 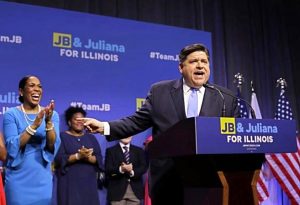 Rauner, who unseated Democratic Governor Pat Quinn in 2014, fought off a formidable challenge by ultra-conservative state Representative and military veteran Jeanne Ives, 51.4% to 48.6%.  The contentious primary underscored divisions within the state GOP on social issues like abortion and immigration, and paints a difficult path for Rauner's re-election.

The primary results also set the stage for what promises to be the most expensive gubernatorial contest in history.  Republican Rauner, a private equity investor, put $58 million of his own funds into the primary race, and Democrat Pritzker put in $70 million.

Democratic Primaries
In the state's highest profile congressional primary contest, Democratic Congressman Daniel Lipinski narrowly held off a challenge by marketing consultant and political newcomer Marie Newman.  The seven-term incumbent, who represents southwest Chicago, is pro-life, voted against Obamacare and is considered one of Congress' most conservative Democrats.

Although national progressive groups, who invested heavily in Newman, can point to Lipinski's razor-thin 51.2% to 48.8% win as a blow to the centrist arm of the party, the third congressional district is, at least, very likely to stay in Democratic hands.  Lipinski will face Republican Arthur, who has been called a Nazi by his own state party, in November. 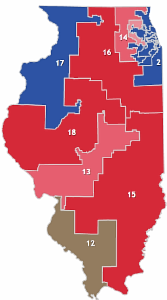 Garcia first drew public attention when he forced incumbent Chicago Mayor Rahm Emanuel into a 2015 runoff election, and is a favorite of state progressives.

Illinois' US House Seats
Illinois has 18 US House districts, eleven of which are controlled by Democrats and 7 by Republicans. All but one of the Democratic-held districts are in the Chicago area, and all considered safely Democratic.