At 3:49pm yesterday, the United States Senate, by a vote of 57 to 43, acquitted Donald J. Trump on the Article of Impeachment on Incitement of Insurrection. 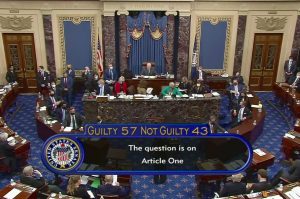 Seven Republicans joined the 50 Democrats in voting for conviction, making it the most bipartisan presidential impeachment vote in the history of the United States.

The numbers, however, were still short of the two-thirds threshold required to convict the former president for high crimes and misdemeanors against his country and the citizens he swore to represent.

It was Not for a lack of evidence, which the House Managers painstakingly documented in 9 1/2 hours of riveting and sometimes chilling detail over the first four days, irrefutably proving the guilt of the former president.

It was Not because the defense proved their case. The president's counsel, over a mere 2 1/2 hours, was widely criticized on both sides of the aisle as inept and haphazard, with several of their arguments refuted by the legal authorities they quoted.

It was Not because Trump's actions were protected by the First Amendment clause of the Constitution. This defense was declared as "legally frivolous" in an open letter signed by 144 constitutional scholars at the onset of the trial.

It Was because 43 Senators hid behind what amounted to a technicality, asserting that the former president was not constitutionally subject to the jurisdiction of the senate.

It Was because of the fear of a Republican party still beholden to Donald Trump and individual members wary of alienating the still-powerful Trump base and endangering their own primary or general reelection chances.

It Was because of Senate Minority Leader Mitch McConnell's attempt to hold onto his leadership position while balancing the indefensible actions of a President who has held the GOP hostage for four years.

"January 6th was a disgrace," began McConnell. "American citizens attacked their own government...

"They did this because they had been fed wild falsehoods by the most powerful man on Earth - because he was angry he'd lost an election. 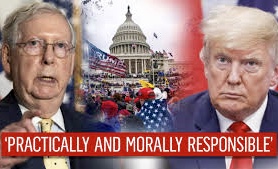 "Former President Trump's actions preceding the riot were a disgraceful dereliction of duty.

"There is no question that President Trump is practically and morally responsible for provoking the events of that day.

"The people who stormed this building believed they were acting on the wishes and instructions of their President. And their having that belief was a foreseeable consequence of the growing crescendo of false statements, conspiracy theories, and reckless hyperbole which the defeated President kept shouting into the largest megaphone on planet Earth....determined to either overturn the voters' decision or else torch our institutions on the way out.

"The unconscionable behavior did not end when the violence began," continued McConnell.

"A mob was assaulting the Capitol in his name. These criminals were carrying his banners, hanging his flags, and screaming their loyalty to him. It was obvious that only President Trump could end this...But the President did not act swiftly. He did not do his job. He didn't take steps so federal law could be faithfully executed, and order restored. 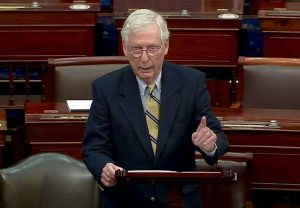 "Even after it was clear to any reasonable observer that Vice President Pence was in danger...the President sent a further tweet attacking his Vice President...And even then, with police officers bleeding and broken glass covering Capitol floors, he kept repeating election lies and praising the criminals.

"In recent weeks, our ex-President's associates have tried to use the 74 million Americans who voted to re-elect him as a kind of human shield against criticism...That is an absurd deflection. 74 million Americans did not engineer the campaign of disinformation and rage that provoked it. One person did.

"If President Trump were still in office, I would have carefully considered whether the House Managers proved their specific charge...BUT in this case, that question is moot. Because former President Trump is constitutionally not eligible for conviction," concluded McConnell.

This morning Senator Lindsey Graham (SC), a member of the GOP leadership said, "My goal is to win in 2022, to stop the radical agenda I have seen coming out of the Democratic presidency of Joe Biden. We can't do that without Donald Trump, so he is ready to hit the trail and I am ready to work with him."

Convention Central: DemList Weekly Round Up!

Our DemList Weekly Convention Round Up on information, events, logistics and happenings at the Democratic Convention. Speakers Announced: Released today! The headline speakers & themes for...