A key component of DemList's mission is promoting the good work of the players and allies. 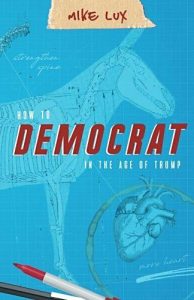 One who has played multiple roles in shaping and advancing the progressive movement is democratic strategist Mike Lux, whose book, How To Democrat In The Age Of Trump, was just released.

The Book
Having spent a lifetime fighting the good fight in the trenches of the progressive movement and Democratic Party, Mike Lux has seen the good, the bad, and the ugly of politics up close and personal.

From the glorious victories to the staggering defeats to the persistent stagnation of never getting shit done, Lux analyzes what has been going wrong for Democrats in the last decade and offers a blueprint for how to start winning again - not just this year, but for generations to come.

"I wrote this book to try to provoke an honest conversation ... to come up with solutions for the problems that are plaguing the party and our progressive movement"

He writes about the false choices - focus on swing vs. base voters, fairness vs. growth in the economy, urban vs. rural outreach - that have hurt Democratic chances. He stresses how Democrats must distinguish themselves from Republicans on the critical American ideal of freedom.

A progressive populist before it was cool, but with an aversion to blindly following anyone's dogmatic approach, Lux lays out a strategy and message for winning a long-term Democratic governing majority.

A veteran of campaign and white house politics, author, speaker and blogger, Mike Lux is a co-founder of Democracy Partners and the founder of American Family Voices, which has waged countless public education and legislative campaigns as a strong voice for middle and working-class families.

Book Parties!
Join us at the June 5th DC event, which will benefit American Family Voices, or attend one of the free events in other cities!

Purchase The Book (just $14.99) On Amazon, Kindle, and Smashwords