It was the second blow to President Donald Trump in the last two weeks, following the Democratic victory in the November 5th governor's race in Kentucky, another traditional Republican state. Edwards beat businessman Eddie Rispone 51.3% to 48.7%. 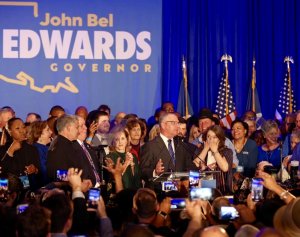 Edwards: "How sweet it is!" (pic: Matt Sullivan/Getty)

Trump, who won Louisiana with 58.09% in 2016, went all out for Rispone, campaigning several times in the Bayou State before the election, making it a referendum on his own popularity. Trump said at one rally, "You gotta vote. Because if you lose it sends a really bad message. You can't let that happen to me."

His efforts, however, helped drive a higher anti-Trump turnout, including among black voters, which comprise 31% of the electorate.

Edwards, 53, was first elected in 2015 and is the only Democratic governor in the Deep South, having defeated former US Senator David Vitter (R) for the office in 2015.

Edward's victory feeds into the argument by Democrats who argue that nominating a moderate presidential candidate is the best way to defeat Trump in the 2020 general election.

Edwards opposes gun restrictions, signed one of the nation's strictest abortion bans and has steered clear of the impeachment effort. He touted his achievements in turning Lousiana's budget deficit into a budget surplus, and in increasing funding for K-12 schools, higher teacher pay, and expanding Medicaid.

The voter boost, however, was not enough for the Secretary of State's contest, where Republican incumbent Kyle Ardoin prevailed over Democratic challenger Gwen Collins-Greenup, 59.1% to 40.9%. 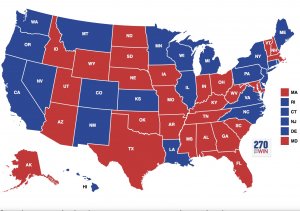 Republicans maintained their majorities in the State House and Senate. They won a veto-proof supermajority in the Senate but fell two seats short of the threshold in the House.

In Louisiana, like many states, redistricting is controlled by the
state legislature and subject to veto by the Governor.

Democrats control 23 of the country's Governors' mansions to Republicans' 27.

July 2, 2019 In one of its most impactful decisions regarding our election system, the Supreme Court of the United States(SCOTUS) ruled last week that federal courts are powerless to intervene in...