Two weeks out from the midterms, the surge in Republican enthusiasm following the Kavanaugh Supreme Court nomination battle has tempered some projections on the Democratic takeover of the US House. 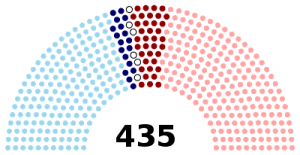 Our analysis, and the numbers, however, show otherwise.

Based on an October 14-17 NBC News/Wall Street Journalpoll, Democrats hold a 9-point lead over Republicans among likely voters.

Make no mistake, the blue wave is still coming.

Ratings based on a review of CookPoliticalReport, FiveThirtyEight, Sabato'sCrystalBall & DemList's final call.
Key: Lean Republican (22) and Republican Toss Up (29), Lean Democrat (13), Likely Democrat (4). In open seats, the outgoing incumbent is noted in parentheses.

Note: Chart reflects the new Pennsylvania Congressional District (per SCOTUS February ruling). The Republican incumbent who previously represented the majority of that geographic area is indicated.

DemList is a daily political column dedicated to informing and connecting you
to the issues, politics and the players. Forward and Follow on Facebook, Twitter and LinkedIn