While the presidential election seems almost frozen in time, there are hundreds of other elections up in 2020 that will impact control of Congress.

Whether in-person, by mail or online, voters will cast their ballots for 435 congressional races in November and they are worthy of our attention.

THE HOUSE
Current Count: 200 Republicans to 235 Democrats (Includes one Independent)

While it is unknown how the current crisis will affect the outcome of the House elections, at present roughly 15-20 Democratic seats are considered truly vulnerable. Comparatively, just 8-10 Republican seats are considered toss-ups or key takeovers, putting Democrats' control of the US House in danger.

The expanding list of Republican retirements, however, is increasing Democratic opportunities, with now 27 GOP members not seeking re-election, compared to nine Democratic members.

Red to Blue
Based on a review of ratings by the CookPoliticalReport, FiveThirtyEight, Sabato'sCrystalBall and Inside Elections, we have compiled Democrats' top targets for turning GOP-held seats from red to blue.

Of those, three are considered likely or certain Democratic takeovers. Two seats are part of the new, court-mandated North Carolina congressional map, redrawn to replace the state's previous Republican- gerrymandered map. The third is in Texas' open 23rd CD, where moderate Republican Will Hurd is retiring.

Republican retirements in Texas 22, Texas 24 and Georgia's 7th CD also put those seats near the top of the takeover list, along with vulnerable incumbents in Illinois' 13th and Pennsylvania's 10th districts.

In the regularly scheduled primaries that run from March to September, 2020, Democratic challengers are being nominated to run against these GOP targets, and we will keep you posted on the top contenders. 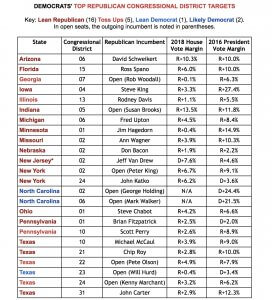 *Jeff Van Drew was elected in 2018 as a Democrat in New Jersey's 2nd CD, but switched to the Republican Party in January, 2020.

DemDaily: The Status of the Presidency 5:00am

At 2:50am this morning Donald J. Trump took the stage. At 5:00am the four remaining states