Voters will cast their ballots for 435 congressional races in November, and as part two of our House Races and Ratings, to follow is our rundown of the most vulnerable Democrats -- who need your help.

THE HOUSE
Current Count: 235 Democrats (Includes one Independent) to 200 Republicans

The GOP has launched an all-out assault on the freshman class of 2018, targeting vulnerable Democrats who won in districts where Trump triumphed in 2016.

Of our top thirty, which include 17 Toss Ups and 13 Democratic-leaning districts, 26 are freshman members, and 23 CDs voted Republican in the last presidential election.

Blue to Red
Based on a review of ratings by the Cook Political Report, Sabato's Crystal Ball and Inside Elections, we have compiled Republicans' top targets for flipping Democratic districts to the GOP. 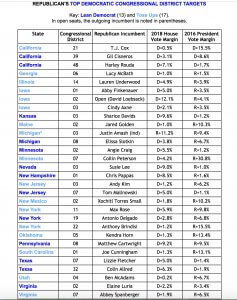 *Justin Amash was elected in 2010 as a Republican to represent Michigan's 3rd CD and, in July of 2019, switched to an Independent who caucuses with the Democrats.

March 31, 2020 While the presidential election appears publicly to be on hold, national polls continue to monitor the mood of the electorate amidst the daily escalation of the coronavirus pandemic...