Voters will cast their ballots for 435 congressional races in one month, and as part two of our House Races and Ratings, to follow is a rundown of the most vulnerable Democrats -- who need your help.

Current Count: 201 Republicans to 234 Democrats (Including one Libertarian)
There are an additional six non-voting members from D.C. and the Territories
218 seats for control

Based on an extensive review of ratings, and our own analysis, we have compiled Republican's top targets for turning Democratic-held seats from blue to red.

It is noteworthy that many of the Democratics who flipped Trump districts in 2018 are absent from the top targets list, while several members on our endangered GOP members are in demographically shifting, increasingly suburban districts where Republicans lost ground in 2018.

As pointed out in yesterday's column, however, if neither Joe Biden nor Donald Trump wins an outright Electoral College victory, then the election goes to the U.S. House of Representatives for a vote. That vote is based not on the number of seats, but which party controls each congressional delegation, with one vote going to each state.

Although Democrats currently control the House, Republicans actually control 26 delegations to Democrats' 22, with Pennsylvania tied and Michigan a 7-6 plurality for Democrats, with a 14th seat held by a Libertarian.

That increases the urgency of protecting individual seats, like the three vulnerable Democratic incumbents in Iowa. More to come on that breakdown! 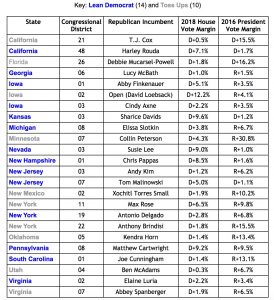 SignUp for the Daily updates on the issues, politics and players
Follow on Facebook, Twitter and LinkedIn
Go to the DemList Election Calendar for all Biden-Harris events!

February 5, 2021 To Remind Us to Laugh On Trump’s last day “I don’t know what tomorrow’s gonna feel like. Probably like that moment when they pull the nasal swab out of...