Although Democrats currently control the US House, the outcomes of individual races have taken on a new level of significance with the possibility that the fates of the presidency and the House may become intertwined.

If neither Joe Biden nor Donald Trump wins an outright Electoral College victory in what is already the most divisive presidential election in history, then the election goes to the U.S. House of Representatives for a vote.

That vote, however, is based not on the number of seats, but which party controls each delegation, with one vote going to each state.

If the scenario plays out, which hasn't happened since 1876, every one of the following GOP seats is a critical target for turning blue if we are to ensure Joe Biden becomes our next president. Vote. Contribute.
Pass it on.

THE HOUSE
Current Count: 201 Republicans to 234 Democrats (Including one Libertarian)
There are an additional six non-voting members from D.C. and the Territories
218 seats for control

Based on an extensive review of ratings, and our own analysis, we have compiled Democrats' top targets for turning GOP-held seats from red to blue. Tomorrow: Democrats' most vulnerable seats. 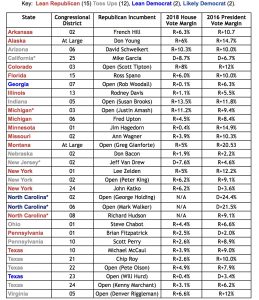 * CA 25: Mike Garcia (R) won the May 12, 2020 Special Election to fulfill the remaining term of Katie Hill (D), who resigned October 27, 2019.
* MI 03: Justin Amash was first elected as a Republican in 2010, but switched parties to Independent in July, 2019 and caucused with the Democrats. In May, 2020 he switched to Libertarian to run briefly for President.
* NC 02, 06, 08: The seats are part of the new, court-mandated North Carolina congressional map, redrawn in 2019 to replace the state's previous Republican-gerrymandered map.
* NJ 2: Jeff Van Drew was elected in 2018 as a Democrat, but switched to the Republican Party in January, 2020.

SignUp for the Daily updates on the issues, the politics and the playersFollow on Facebook, Twitter and LinkedIn

DemDaily: Bullies at the Ballot Box!

Americans are voting in every state and the first projected network election results should start rolling in around 7:00pm. The last polls close at 9:00pm on the east coast, and at 8:00pm (11pm...

July 21, 2017   This week’s news cycle covered the gamut from failure of the GOP’s Healthcare Bill to OJ Simpson’s parole, to the resignation of White House Press Secretary...