House Democrats ushered in a new generation of leadership on Wednesday, led by five-term Congressman Hakeem Jeffries (NY), the first Black American elected to the top post. He has served as House Democratic Caucus Chair for the past four years.

The elections follow the November 17 announcement by Congresswoman Nancy Pelosi that she was stepping down as her party's senior leader. Pelosi, 82, is the first and only woman in history to hold the Speaker's gavel -- one she has skillfully wielded four times over the last two decades. 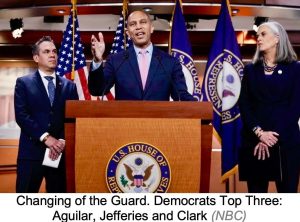 Jeffries, 52, was unanimously elected Democratic Leader on Wednesday saying he was "eternally grateful for the trust my colleagues placed in me with their votes...We stand on the shoulders of giants but are also looking forward to being able to do what’s necessary at this moment to advance the issues.”

Congresswoman Katherine Clark (MA), 59, was elected Minority Whip, succeeding Congressman Steny Hoyer (MD), 83, as the Democrats' second in command. Clark, who was elected in 2013, served as Assistant Speaker this Congress -- the first woman to hold the position.

Four-term Congressman Pete Aguilar (CA), 43, was elected to the number three job as Democratic Caucus Chairman, the highest-level position ever held by a Latino in the House. Aguilar, who is a member of the January 6th Committee, will be responsible for steering Democrats' legislative priorities. Upon election, he said, “I look forward to bringing together all the voices in our party to safeguard the progress we’ve made...we're not going to be in the minority long. The path is in front of us for the majority in 2024."

Congressman James Clyburn (SC), 82, who served as Whip in the majority, is shifting instead to Assistant Leader - now the number four minority position in the new Congress.

Clyburn was facing an 11th-hour challenge by Congressman David Cicilline (RI), 61, who ran on the need to have an LGBTQ+ member at the leadership table. Cicilline, however, withdrew his candidacy just prior to the vote, allowing Clyburn to win by acclamation. 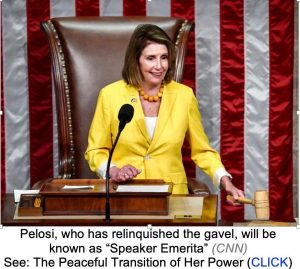 By contrast, the Republican leadership elections have been far from seamless.

House Minority Leader Kevin McCarthy (CA), who has long positioned himself for a bid as the new Speaker, is fighting opposition from several hardline conservatives from the House Freedom Caucus.

In a November 15th closed-door conference meeting, McCarthy's nomination for speakership received 188 to 31 votes for challenger Andy Biggs (AZ), whose candidacy was pushed by the Trump-aligned Caucus. 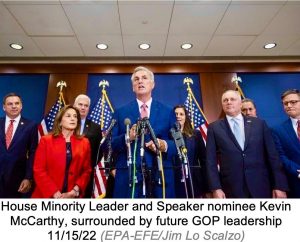 McCarthy, however, will still need the votes of 218 of the anticipated 222 GOP members on January 3rd to secure the speakership. If he does not prevail in the first round floor vote, multiple rounds of balloting may occur until he is declared Speaker.

With each round, McCarthy would have to strike bargains with resistant Republican members, further compromising a legislative agenda already severely hindered by an unexpectedly close margin of seats held by Democrats.

Other top GOP leadership roles have already been determined, led by Congressman Steve Scalise (LA), who was unopposed for Majority Leader.