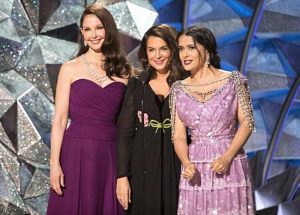 Ashley Judd, Annabella Sciorra & Salma Hayek praise #MeToo and Times Up movements: "The changes we are witnessing are being driven by the powerful sound of new voices, of different voices, of our voices."

Last night's 90th Academy Awards did not disappoint fans expecting a mix of political commentary from the outspoken and traditionally liberal group of attendees, or from host and late-night talk show star Jimmy Kimmel.

For the second year in a row Kimmel hosted the star-studded tribute to Hollywood's best and brightest at the Dolby Theatre. Along with presenters, he touched on everything from President Trump and immigration to guns and the "Me Too" anti-sexual harrassment movement that arose from tinseltown's own ranks. 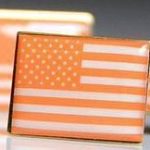 On the star of "Black Panther," "There's Chadwick Boseman... the king of Wakanda! Imagine that! A country with a black leader. Wouldn't that be swell?"

In referencing the latest staffer to quit the Trump White House, "tonight's nominated documentaries show us that where there is darkness, there is also hope. Except at the White House. Hope quit on Wednesday."

In addressing Jordan Peele, author of the "Get Out," a horror flick highlighting race in America, "None other than President Trump called 'Get Out' the best 3/4 of a movie so far this year."

Kimmel on Oscar statue "the most respected man in Hollywood," because "he keeps his hands were you can see them, never says a rude word, and most importantly, no p.... at all."

Presenters and immigrants Kumail Nanjiani (Pakistan), co-writer and star of "The Big Sick," and Oscar winner Lupita Nyong'o (Kenya), said "Like everyone in this room and everyone watching at home we are dreamers ...We grew up dreaming of one day working in the movies. Dreams are the foundation of Hollywood, and dreams are the foundation of America ... To all the Dreamers out there, we stand with you." 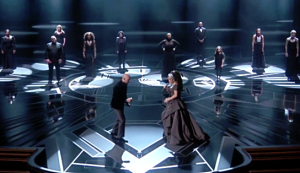 In one of the highlights of the evening
Andra Day and Common performed the song "Stand Up for Something" from the film "Marshall," and were joined on stage by activists Cecile Richards of Planned Parenthood, Patrisse Cullors of Black Lives Matter, Alice Brown Otter of Standing Rock Youth Council, author and Syrian refugee Bana Alabed, Bryan Stevenson of Equal Justice Initiative, Dolores Huerta of Dolores Huerta Foundation and United Farm Workers of America, Janet Mock of #GirlsLikeUs, Jose Andrés of ThinkFoodGroup, Nicole Hockley of Sandy Hook Promise, and Tarana Burke of #MeToo.

Guillermo del Toro, who accepted both the Best Director and Best Picture Oscars for "The Shape of Water," made a final plea, "I am an immigrant. In the last 25 years, I've been living in a country all of our own. The greatest thing our industry does is to erase lines in the sand. We should continue to do that."

December 6, 2018 The business magazine, Forbes, released its 2018 rankings of the World’s 100 Most Powerful Women this week. Now in its 15 year, the annual list represents the best and the...