The highly contentious fight for the Speaker of the US House of Representatives, unprecedented in modern American history, continued without resolution today -- holding the business of "The People's House" hostage. 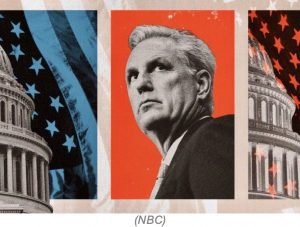 While Republicans may have won control of the House in the November 2022 midterm elections, their two-day reign has been marred by a very public, bitter battle within their own party over who will lead their conference.

The showdown is between the 90% of GOP members who support the nomination of current House Minority Leader Kevin McCarthy (CA) and a small but unwavering faction of ultra-right representatives who oppose seating him as speaker at all costs.

With a narrow majority of just nine seats over Democrats' united 213 (including one vacancy), it takes just five GOP members to block McCarthy from obtaining the 218 votes needed to secure the speakership. The "never-Kevin" coalition is 20 people strong. 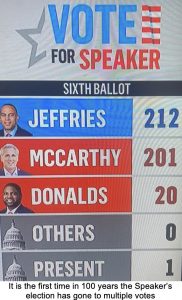 Rather than the traditional congressional opening day festivities and swearing-in of members January 3, yesterday was a chaotic display of wills between the two GOP factions, playing out over three unsuccessful ballot votes for a speaker.

The rebel Republicans randomly split their protest votes between Congressmen Jim Jordan (OH), who supports McCarthy, and Andy Biggs (AZ), who lost to McCarthy in the GOP's internal conference vote for the nomination in November.

McCarthy's last hope may have been the endorsement of former President Donald Trump, posted on Truth Social this morning. Trump's once-heavy influence over many of the 20 dissenters, however, failed to move a single vote.

One outside possibility is that McCarthy negotiates with Democrats to give him the votes necessary to win, in exchange for legislative concessions -- a move Congresswoman Alexandria Ocasio-Cortez (D-NY) said would be "unprecedented. Could it result in a potential coalition government? Could we get Democratic chairs of committees as a result? We don't know."

Democratic Leader Hakeem Jeffries, however, said on Tuesday, "We are looking for a willing partner to solve problems for the American people, not save the Republicans from their dysfunction."

The pressure is mounting for McCarthy to step aside in favor of a consensus candidate like Steve Scalise (LA), who was elected by his colleagues as the new Majority Leader, or House GOP Conference Chair Elise Stefanik (NY). Both stand firmly behind McCarthy - for now.