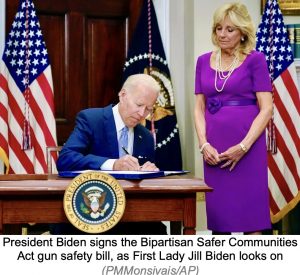 The long-sought legislation follows several particularly deadly gun massacres, including the May 24 shooting which killed 19 children and two teachers in Uvalde, Texas.

Connecticut Senator Chris Murphy (D-CT), whose home state was the site of the 2012 Sandy Hook murders, led the negotiations in the Senate, along with John Cornyn (R-TX), Kyrsten Sinema (D-AZ), and Thom Tillis (R-NC).

The Senate passed the legislation late Thursday, 65 to 33, with 15 GOP Senators crossing party lines. The House passed the bill 234-193 Friday night and sent it to Biden's desk. 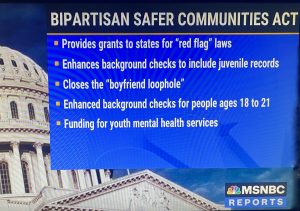 The Act strengthens background checks for the youngest buyers and incentivizes states to pass red-flag laws, which allow for an “extreme risk” protective orders barring people from buying or possessing firearms if a judge deems them to be a threat to themselves or others.

It also closes the "boyfriend loophole," expanding an existing law that prevents people convicted of domestic abuse from owning a gun to include dating partners rather than just spouses and former spouses.

While the 80-page bill represents a breakthrough after years of stalemate in Congress on addressing gun violence, Republicans refused to consider more substantive measures that Democrats have fought to enact.

These include universal background checks, a ban on the sale of large-capacity magazines, a mandatory waiting period for gun sales, and a license requirement to purchase an assault weapon.

Although Biden acknowledged that the bill doesn't do everything he wants, and "nothing can fill the void" of those who lost loved ones to gun violence, "lives will be saved" by the legislation. 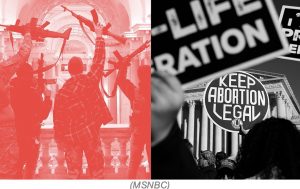 In yet another landmark decision for the High Court's conservative supermajority, SCOTUS struck down, 6 to 3, New York's 111-year-old law, ruling it was unconstitutional.

Writing for the majority, Justice Clarence Thomas wrote that the Second Amendment's "constitutional right to bear arms in public for self-defense is not 'a second-class right, subject to an entirely different body of rules than the other Bill of Rights guarantees."

The choice of wording is particularly ironic as, on Friday, the Supreme Court overturned the 1973 abortion rights decision in Roe v. Wade, relegating women to second-class citizens by taking away their right to make decisions over their own bodies.

"The hypocrisy is raging, but the harm is endless," said House Speaker Nancy Pelosi on Friday.

May 25, 2022  Five states held elections Tuesday, including high-profile primaries in Georgia and runoff races in Texas. GEORGIA In the marquee US Senate race, the general election...